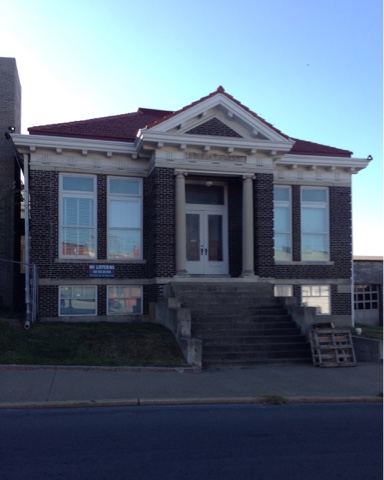 If I had known I'd be passing through Mexico, Missouri I might have been more inclined to have headed down to Patagonia, Arizona, not far from the Mexican border, at the start of these travels to complete a pairing of Latin American-named towns that evoke a rush of fond memories, having biked hundreds of miles in each.  A couple of long-time friends, who are ardent travelers, have taken up residence in Patagonia, but neither could assure me they would be there after Telluride. It still would have been nice to have gained an acquaintance with the town and also to add some Carnegies in Arizona and New Mexico to my collection, but I opted instead to cut several hundred miles from my ride so I could reach Bloomington, Indiana in time for its annual Hilly Hundred weekend.

I was drawn to Missouri's Mexico by its Carnegie library. It was vacant and looking a bit neglected and  rejected, especially compared to the adjoining grand Carnegiesque library that had replaced it. At least it hadn't been razed.  I wasn't able to inquire if the library had any plans for it, even though I had ridden hard to reach it before five and its presumed closing time, as it had been closed for the day so the staff could assist with the move of books to a branch library in the neighboring town of Vandalia. 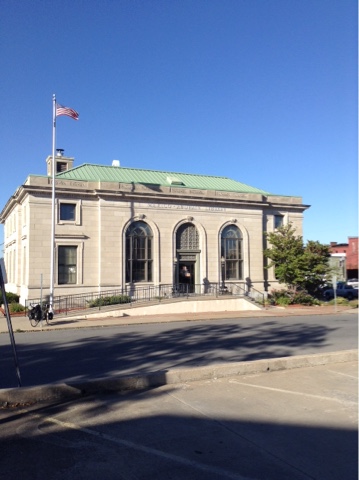 Mexico, with 11,000 residents, was the largest town I had passed through all day, big enough to have a country club and also a parking lot twelve miles out of town for carpoolers.  I had spent the day riding small county roads through tiny towns, including Dalton with a population of seventeen. The only food available was the meager selections at a lone Casey's General Store and a Dollar Store.  They have driven out local stores all along my route.  Casey's was in a town of just a couple hundred people.  I asked the teenaged girl at the checkout counter if there was a library in the town.  "We don't have anything here," she scoffed.  A few minutes later, as I sat outside the store drinking a chocolate milk and reading "Catcher in the Rye" she passed by with the garbage.  She came to life and blurted, "I love that book."

I thought I had made a mistake when I ventured off the main highway for this more direct route on tiny roads when I hit a stretch of gravel.  Fortunately, it only went on for five miles and was relatively flat. But I rode very warily remembering my tumble on gravel in Nebraska last year that came near to breaking a collarbone.  There were stretches of roller-coaster steep hills that also made the shorter route longer than the long route.  It gave me a taste of my weekend of hills in Bloomington to come and made me happy that I'd be riding them shed of all my gear.  But it was a nice stretch with no more than two or three vehicles per hour and worry-free camping.  I'm beginning to wonder if I'm going to manage this ride without anyone calling the cops on me for illicit camping with less than a week to go.  Usually it's happened by now lately in my US travels.

With only thirty-five Carnegies, compared to the sixty-six of Kansas, of which I stopped at nine, my route across Missouri will intersect with just three.  The first was in Parkville on the campus of Park College on a bluff overlooking the Missouri River towards Kansas City.  As with most of the academic libraries Carnegie funded, its architecture blended in with the campus architecture and wasn't particularly recognizable as a Carnegie.  Such libraries are still statuesque structures, but they don't distinguish themselves from all the buildings around them as the public libraries do. 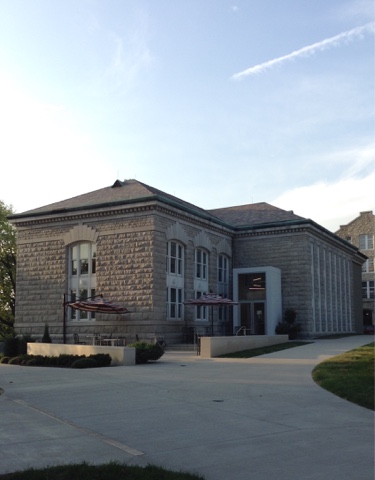 I had not much more than an hour before dark to find a place to camp after crossing into Missouri and visiting Parkville.  All the suburban developments on the other side of the river from Kansas City  caught me by surprise. They went on for miles and miles broken only by malls with the usual franchises. I thought I'd be back into rural America heading north out of Kansas City, but the sprawl of new cloned two-story homes in vast developments continued unabated.  I was lucky to find a pocket of forest with a trail blocked by a gate and a "No Trespassing" sign that I could go around for a nice quiet campsite other than a distant barking dog.

During the night a front passed through bringing rain and a drop of temperature.  It was below sixty when I broke camp, necessitating not only a long-sleeve shirt for the first time in a week, but my windbreaker. Clouds filled the sky for the first time since I left Telluride over two weeks ago.  At last, fall conditions.  Now just the hills, and not the heat, were sapping my energy.  The much more fertile soil of Missouri was reflected in corn over head-high that helped blunt what little breeze there was.  Forests also made the terrain look much more habitable than Kansas.  But the towns were still small and on the fade.  The Carnegie in Excelsoir Springs was vacant and nearly as forlorn as the one in Mexico.  A "For Sale" sign was in its window.  All of the "historic downtown" was equally shabby, though not uninviting.  One could find a home for a song here.  The town's new standard library was on its outskirts near its Dollar Store and other franchises. 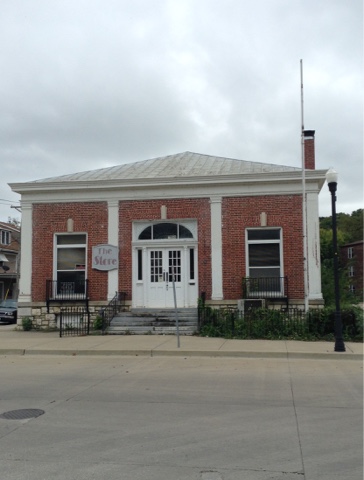 The small towns I've passed through are truly dying, but the larger towns are full of "Now Hiring" signs, from fast food joints to small factories, something I hadn't seen in years past on my commute back to Chicago.  One receives very mixed signals on the health of the economy. 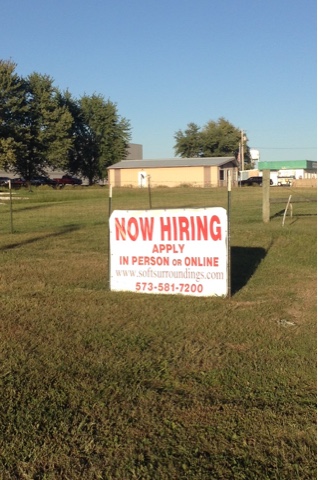 It was two days of riding from Excelsior Springs until the next Carnegie in Mexico.  And after Mexico there would be no more until I cross the Mississippi into Illinois.  Even with all my meandering around my home state over the years nine Carnegies await me that I have yet to visit across its southern extremity as I head to Indiana.

This ride is distinguishing itself not only of being free of a brush with the law, but also without a flat tire, a virtual miracle having crossed a long stretch of goat's head terrain. I also went over a thousand miles before my first roll of electrician's tape, something I was actually in need of as I'd used what I'd brought in Telluride.  So far I have two license plates for Dwight and have collected three neckerchiefs, including a rare albino one, and two more bungee cords in addition to the two I left with Joel.

And as has happened several times before on these Carnegie  quests, I heard Ralph Nader pay homage to Carnegie. He mentioned him in his podcast of August 5 when he was interviewing David Callahan, author of the book "The Givers: Wealth, Power and Philanthropy in a New Gilded Age."  It wasn't until the end of the hour interview that Nader lauded Carnegie for funding "2,500" libraries in the United States and Canada.  The precise number of Carnegie-built libraries is 2,509 with 1,689 in the US, 126 in Canada and the rest in Europe, Africa, New Zealand, Australia and a few island republics.  He accurately quoted Carnegie from his book "Gospel of Wealth," where he wrote, "The man who dies rich, dies disgraced."  Nader added, "I don't think anything has been written better by a billionaire."  Nader also praised Warren Buffet for his philanthropy.  He gives each of his three children $100 million a year for their charitable organizations.  One of his daughters has funneled $500 million dollars to women's groups supporting abortion, more than anyone else.

Posted by george christensen at 6:50 PM