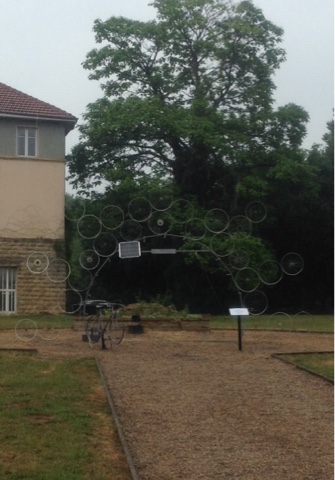 Two more Ville Ètapes and no bike concoction or Tour tribute that made me go "Wow" as happened multiple times in and around Vesoul a couple of days ago.  An arcade of wheels in Longwy almost registered a "Wow," but not quite.  It was virtually the lone Tour-related object mounted in the tired industrial city of 14,500 inhabitants just below the borders of Belgium and Luxembourg.  Usually the first city The Tour visits in France after a foreign start is much more celebratory.  After setting out from Germany and passing through Belgium and Luxembourg and nearly touching Holland, The Tour won't reach home turf until the end of Stage Three.

It will have an exciting finish with a mile climb through the lower part of the city up to its higher part right across from the large plaza where it's Tourist Office resides.  The Tourist Office had some Tour trinkets for sale, but nothing out of the ordinary.  I'm still waiting for the first Ville Ètape Tourist Office to be offering a collectible souvenir as others have done in the past--stickers or post cards or pins or pens.  It makes me worry that interest is on the wane, but the economy is no doubt to blame.  Come Tour day the enthusiasm will be off the charts as usual.

Longwy had a set of Tour-colored bike cutouts mounted on a wall, 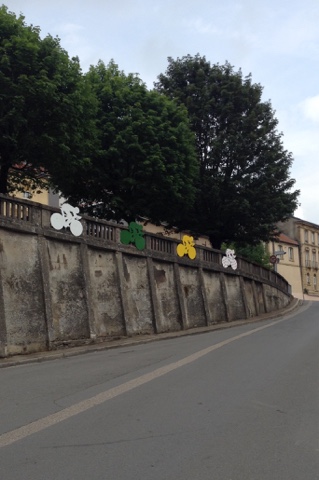 but it didn't compare to the barrage in Vesoul country. 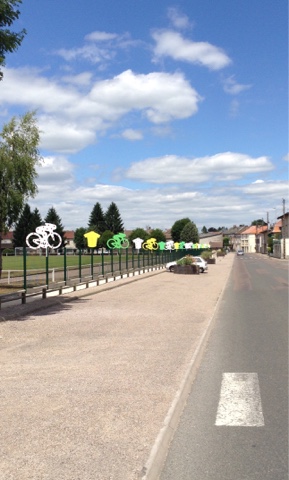 I had hoped for an explosion of Tour euphoria in Vittel, since it is a double Ville Ètape, hosting a finish and then the next day's start, and also being the home of the long-time water sponsor of The Tour, but the spa town was taking its role for granted not going much beyond a spurt of vinyl posters.  Rather than anything imaginative or exceptional, it just erected a bunch of vinyl billboards. 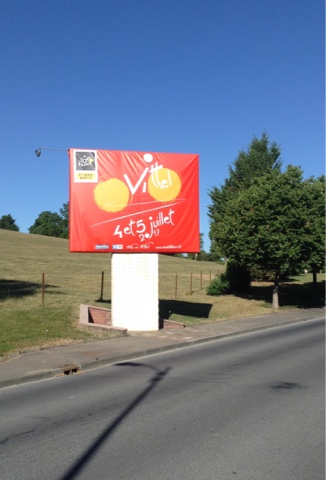 Even the finish and start lines were marked by a slender vinyl sign. 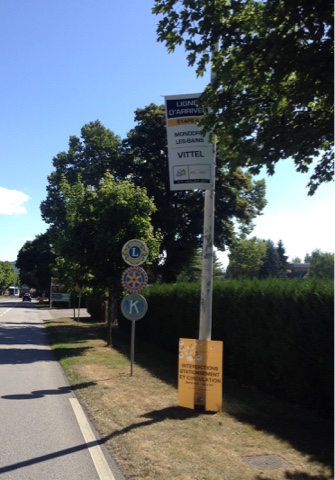 The finish is by the water factory and stadium, while the next day's start is across from the railroad station and Tourist Office.  It wrapped its digital countdown in vinyl and hung it from a railroad bridge that the peloton will pass under a mile from its Stage Four finish.  The Tourist Office featured a slick, futuristic wooden bike created by a local furniture maker. Vittel wasn't blessed with a bike-crazed welder as was Vesoul.  In the days since my visit there I have been wishing I'd had the time to visit his laboratory to see what other creations he might have been working on.  He is definitely someone to search out in the future.  Hopefully I'll have the time to stop in the Tourist Office when I return to find out more about this mad scientist of the bike. 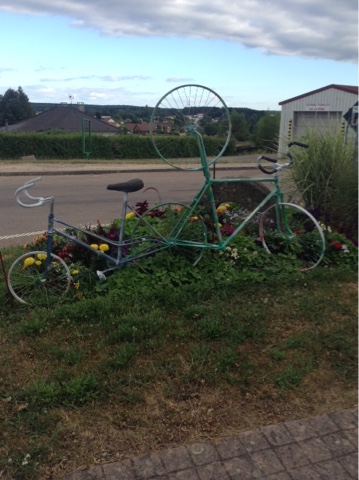 Though it's not on The Tour route I was able to pass through the home town of Joan of Arc as I biked from Vittel to Longwy. Somehow I've managed to avoid Domremy-la-Pucelle in all my years of biking around France.  It remains a quiet, pleasantly uncommercialized village, quite a contrast to the vulgar Disneyfication of Lourdes--France's premier pilgrimage site. There were no tour buses nor billboards nor huge parking lots,  just a couple of small shops selling some token souvenirs to go along with the gift shop mostly devoted to books where one gained entrance to the rebuilt home of Joan of Arc.  There are no buildings remaining in the village from the time when she lived there in the early 1400s, but most of the stone homes look as if they go back centuries.  Hers was rebuilt in the 1800s. 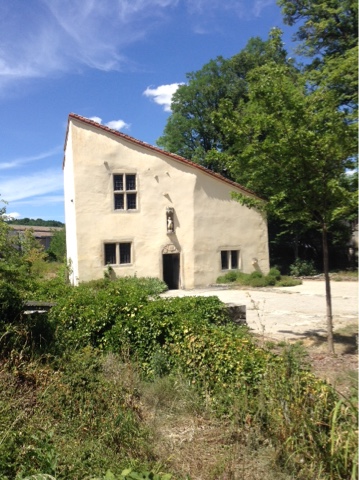 There were just a couple of modest hotels and a barebones municipal campground.  About the only thing even hinting of catering to tourists was a handful of tasteful sculptures.  They would have met the approval of Janina the art critic, and the tranquil, unpretentious village would have enticed her to spend a day or two in its campground to soak in the area's ambiance. 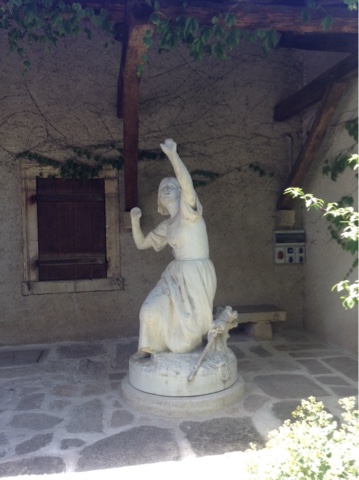 The sheep Joan tended until she was nineteen before she responded to her calling to lead the French troops saving France from the British have been replaced by cattle, though the majority of the surrounding farmland was planted with grains.  I happened to be listening to an audible book on DeGaulle as I approached Domremy.  It repeatedly drew comparisons between him and Joan as saviors of France.  She was a hero of DeGaulle's.  He tried to observe Joan of Arc Day with some significance gesture every year whether placing a wreath on a memorial to her or urging all of France during WWII to defy the Germans to walking the streets in silence at an appointed hour.

I was well versed in Joan lore as I had read Mark Twain's two volume novel on her before I left published in 1896 when he was 61.  It was his final book.  It is narrated in the voice of someone who grew up with her and served her.  It is written very respectfully without any of the flair or humor one associates with Twain. He spent  twelve years researching it and two years writing it.   Once when a teen-aged boy told him how much he loved his books on Huck Finn and Tom Sawyer, Twain responded, "You shouldn't read books about bad boys.  My best is Joan of Arc."


Posted by george christensen at 1:21 AM