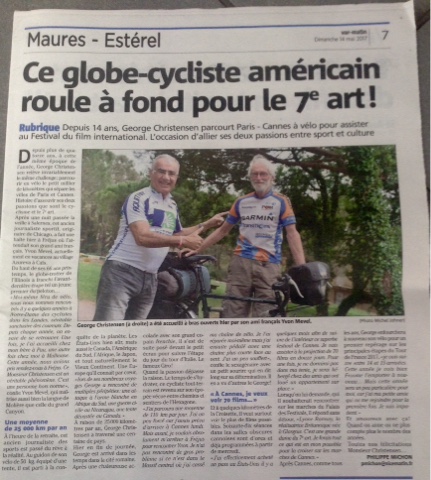 My French brother-in-arms Yvon happened to be taking a week's holiday in Fréjus, just up the coast from Cannes, coincidental to my arrival for the film festival, so we were able to enjoy an early rendezvous this year.  As he has done year after year in locales all over France where we have met up, he fulfilled his duty to the local press and its readership to once again have our enduring cycling friendship put to paper.
The "Var-Martin" found it worthy of page seven of its Sunday paper.  Yvon missed his calling as a Hollywood press agent.  Journalists can not resist his gushingly enthusiastic pitch of our story, especially its consecration at the cycling chapel Notre Dame des Cyclists north of Pau where we met thirteen years ago.
Yvon and his girl friend were on the final day of their holiday when I arrived in Fréjus late in the afternoon Saturday, so we didn't have the opportunity to get in any riding together as we usually do other than from the entry of the vacation complex where he was staying to his quarters. There were more than 400 units and a wide assortment of facilities spread out over twenty-six acres.  Among them was a dining hall where guests ate from a lavish buffet.  It was one of thrifty-five such resorts scattered around the country where French postal workers could enjoy a bargain get-away.
The Giro d'Italia was on the television when we walked into his room.  We watched the final hour of its eighth stage while Yvon served as the conduit for my interview over the phone.  Stephen Roche, a winner of the race, was one of the commentators, but my ear was not sharp enough to detect an Irish accent to his French.  Surprisingly, several of the interviews after the stage were conducted in English, including the one with the Spanish winner of the stage, who evidently didn't speak French or Italian. The crowds along the course were quite sparse, especially compared to the throngs at The Tour de France.  Since it was a French broadcast on the "L'Equipe" network, the female interviewer at the finish area grabbed all the top French riders for a question or two.
Before all the post-race festivities had finished we headed over to the boulodrome for the evening gathering of pétanque, a great passion of the French. It was early in the vacation season with it not warm enough yet to take to the Mediterranean, so there were only a couple dozen guests at the resort.  I would have been content just to watch, but with only five others gathered to play, they needed me to participate as well.   I've tossed the metal balls on a couple of other occasions, so I at least knew enough to launch them under, rather than over, hand and with backspin.
I am gaining the knack, as I was on the winning team in both of my matches and on occasion had the closest ball to the target and even earned a "Bravo" or two.  For the first time I gained a sense of why this game is so infectious, indicating I'm becoming more and more French.  If I'm not careful I may develop a taste for wine. I felt sad it would be awhile before I could play again.  I could well understand now why Yvon plays this convivial game nearly every day.  It fully embraces the fraternité and equalité of the national slogan.
I didn't have to suffer total withdrawal though, as I had the opportunity to watch some experts at play as Frejus was hosting a five-day international competiton concluding Sunday in its ancient Roman arena. In front of the arena is a memorial to the 423 people who died on December 2, 1959 when a dam broke outside of Fréjus. Yvon was twelve at the time and remembers it vividly. He called it one of the worst catastrophes in French history. 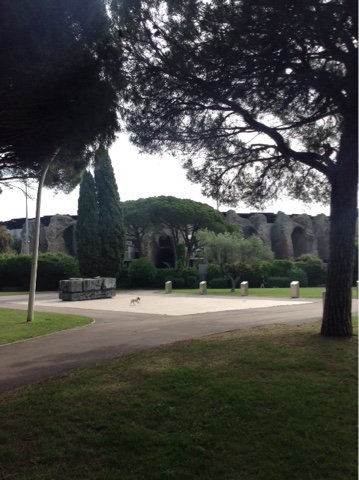 I wasn't surprised to see a team from Madagascar among the competitors, as I saw many playing when I was there two months ago and knew it had won the World Championship in 1999.  They had the most colorful uniforms and were also the least rotund. It was fascinating to study the wide variety of ball-tossing styles and to watch the three-person teams, both men and women, huddling together strategizing.  If I hadn't just played the day before I would have been baffled by the order in which players went, as it hinges on which team has the closest ball to the target.  Tossers can alternate from one team to another or three teammates could go consecutively.  The arena floor was filled with games being played.  There was no response from the spectators, the only sound the non-stop colliding of metal balls that might have been the chirp of crickets. 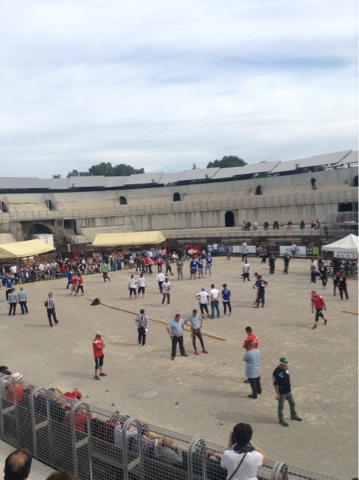 I was sorry that Yvon had to be on his way early in the morning, so he couldn't further illuminate me to the intricacies of the game.  I was lucky that I had pushed hard to arrive in Fréjus a day earlier than I would have to meet up with Yvon, so I had all of Sunday to indulge in the pétanque. I could finally have a rest day after ten arduous days on the bike, as I didn't need to arrive in Cannes, less than twenty-five miles away, until the next day.  Ordinarily I pass though Fréjus late Sunday afternoon and then camp near the summit of the three-mile climb over the ridge that separates it from Cannes.
The winds were mostly against me on my ride down from Paris with two days of mistral-force gales on the Massif Central.  It was such a strain climbing into the stiff wind that I broke my chain.  I didn't realize I had a warped link, but the breakage at least solved the mystery of why I suddenly had difficulty shifting from my middle chain ring to the smallest, where I was spending a considerable amount of time pushing into the wind and climbing.  When the winds finally brought rain, the winds diminished.  And yes, I would gladly take rain over a merciless headwind.
I was up on the Massif Central to scout out Le Puy-en-Velay, a centerpiece for this year's Tour--the Ville Arrivée for the 15th stage, and the Départ for the next stage after serving as the second rest day of The Tour.  This picturesque city of 20,000 down in a valley is a favored starting point for the Camino de Santiago.  Pilgrims can receive a morning blessing at it's World Heritage Cathedral  perched on a Puy before setting out.  Billboards outside of the city announced the coming of The Tour.  It's tourist office was already festooned with strings of mini-Tour jerseys.  An electronic message board counting down the days until The Tour's arrival was at sixty-seven. 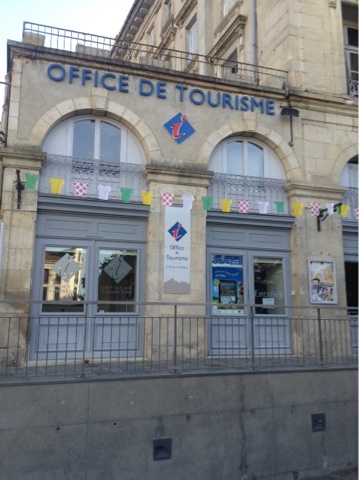 I had planned to follow The Tour route from Le Puy-en-Velay east and across the Rhone to Romans-sur-Isére, but having to arrive in Fréjus a day early, I turned south and headed directly to Salon-de-Provence, Stage 19 Ville Arrivée. The woman behind the counter in its tourist office was bubbling with excitement that Salon would be hosting The Tour for the first time.  It has been an oversight that this prominent city had never had the honor.  There were no decorations yet though other than a yellow stripe painted across the road where the stage would finish right across the plaza from the tourist office. 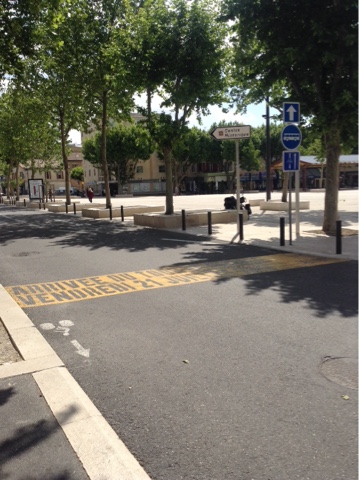 It was 150 miles due east across Provence to Fréjus and Yvon on lightly traveled secondary roads that are the ultimate in cycling. I could fully luxuriate in the rolling terrain dotted with vineyards and small villages and forested mountainsides. It had been several years since I had approached Cannes on these roads, but I had a strong memory of many of its features, anticipating fountains spewing cold spring water where I had previously filled my water bottles and places I had camped and towns where I had obtained provisions. With the knowledge that I was in for much more climbing than if I had taken the main road for the truckers and those in a hurry a bit south, the strain lost some of its sting.
Little had changed other than some of the fountains now bearing "L'eau non-potable" signs, that not everyone was observing. The most significant change I had observed in France was one supermarket chain now putting madeleins in the cookie aisle rather than with the bread.  Not being able to find them initially caused me more than a little consternation, as they are my favorite nibble and please my taste buds almost as much as menthe á l'eau.  But since bread is often shelved in a distant corner, it is to my advantage that they are now among the cookies.   I'll be stocking up on them when I arrive in Cannes, as they will fuel me during my imminent twelve-day movie marathon.
On my climb out of Fréjus I was flagged down by a motorist who had pulled over.  I figured it was someone who had seen the story in the day's newspaper as used to happen to me back in my messenger days after stories on me appeared in The Tribune and The Reader.  But instead it was a woman who had become sick from the winding road and wondered how much further it was to the summit.  This too hearkened me back to the glory of my bicycle messenger days--people asking for directions.  I could tell her it was just a kilometer to the summit.  Cannes wouldn't quite be within site, but I would feel as if I were there.
Posted by george christensen at 1:56 AM