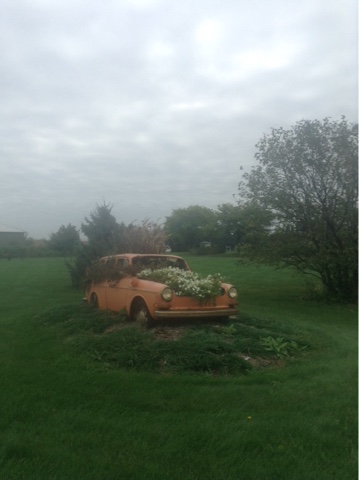 After crossing the Mississippi from the once thriving, but now diminishing city of Clinton, Iowa, to the smaller, but healthier town of Fulton, Illinois, I came upon the first Hillary Clinton lawn sign of these travels and then another and another.  Illinois is a Clinton state even outside of Chicago.  It is also a state whose small towns ardently support their high school football team. There were more signs supporting the "Riverboats"  in Fulton than Clinton signs.  Milledgeville abounded with signs exhorting its team, the "Missils."  Other towns expressed their high school football fervor with TP'ed trees and shop windows with exhortations.

For the first time in four states I was coming upon towns that had an appeal, that had some character and offered a mild enticement to linger for a few hours or days or even to disappear to for a few months to see what life was like in them or to take up a new life as Edward Norton considered in Spike Lee's masterpiece, "The 25th Hour."  Maybe it was because my trip was drawing to a close and I didn't want it to end. But that wasn't entirely true, as Janina, as usual, was drawing me like a strong magnet.  I had hoped to be home by the first of October, making it a three-week ride.  My injury deterred that, but only by a couple of days.

After my return I'll be eager to load our bikes in her car and return to Polo, a town of 2,000, thirty miles from the Mississippi  and one hundred from Chicago.  Not only did it have a pristine Carnegie with a simple "Carnegie" above its entrance,  it was near enough the stunning White Pines State Park to call itself "The Gateway to the Pines."  Polo also distinguished itself with an Islamic Center across the street from the Carnegie, not a sight one often comes upon in rural America.  I was there Sunday morning and there was no one to ask how it came to be there. 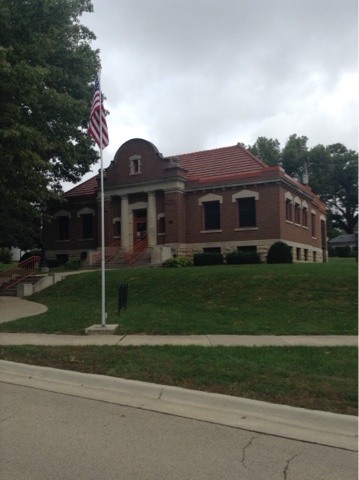 It's Carnegie had a small, addition that blended in to its backside to provide an entrance for the handicapped.  The Carnegie in Fulton had done the same thing.  It's gray brick exterior was so well-maintained I wouldn't have guessed it was over one hundred years old except for its 1909 cornerstone. 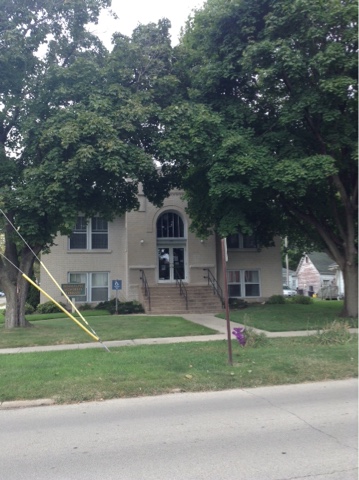 My final Carnegie and thirty-second of this ride came in Rochelle, a city of 9,500, seventeen miles west of  DeKalb and Northern Illinois University.  It had long ago outgrown its Carnegie, but still utilized it with a large addition that fully matched the original, including ornate decorations below the roofline around the entire building.  It maintained its prominence as the most distuished building in Rochelle--a temple and a shrine in the spirit of the majority of Carnegies. My last campsite of the trip was through a soybean field to a dilapidated barn.  As with nearly every campsite once I left the mountains of Colorado, I was regularly woken through the night by freight trains blasting their horns as they approached an intersection.  Freight trains are thriving.  At times as many as three would pass in an hour.  Their engineers must love to toot their horns, as they would occasionally acknowledge me when they'd pass on a lonely road with no traffic for miles.

I braced myself for the heavy traffic of Chicago's sprawl that extends for thirty miles or more in three directions, all except to the east blocked by Lake Michigan.  I am so accustomed to the sprawl, that I fully accepted what I was in for, just as I have been with my bruised shoulder, having endured such an injury three times before.  I'm glad the injury didn't prevent me from finishing off my ride, which has become a virtual commute I have done it so many times.  But unlike the normal commute, there is an inordinate amount of variety and satisfaction in each.  I am already plotting next year's route that will take me to the lone Carnegie I have yet to visit in Colorado, down in its southeast corner, and then a ride across Kansas rather than Nebraska. 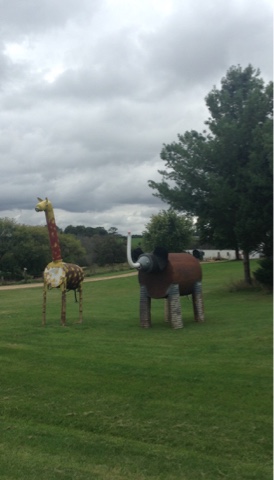 Posted by george christensen at 8:39 AM

George, do you already have your route planned through Kansas on your way back to Chicago for next year, or do you plan closer to the time?

Also, since you're still on the subject of libraries, check out this new restoration of the Rose Reading Room in NYC:

Cheers, from the Heartland!

Two years ago I crossed Kansas on my return sticking to the southern border stopping off at thirteen Carnegies. I'll take s slightly more northerly corridor next year through Wichita, El Dorado, Eureka, Yates Center, Iola and Fort Scott for their Carnegies with possible detours for a few more.

You'll be relatively close by in Ft. Scott. If you get up to KC, itd be nice to meet you. I'm curious; have you been to the Carnegie in Kingman, Kansas?

Bill: Yiu can read all about my visit to the fine Carnegie in Kingman on my September 20, 2014 post

Hey now, George! Thanks for taking the time to locate your Kingman post. I realize I'd read that post when you first blogged it, but I really enjoyed revisiting it again. The picture of the sculpture of the little girl reading at the entrance to the Wellington library was familiar. Here's hoping this finds you well and warm as we descend into the artic cold here in the Midwest. Happy holidays to you, man!