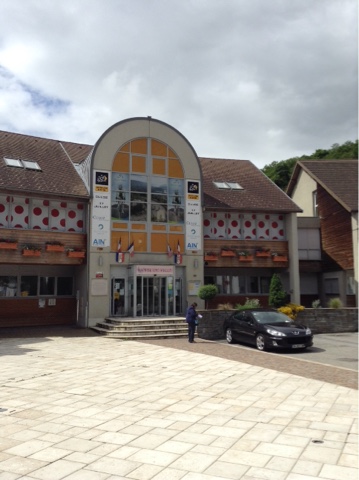 I've previewed nine of the thirty-eight Ville Étapes so far for this year's Tour and Culoz is well in the lead for best decorated honors.  It's modern city hall was fully plastered in Tour colors and emblems and photos.  Banners and bikes and wheels adorned buildings throughout this small town at the foot of the beyond category Col de Grand Colombier.  Yellow reigned supreme. 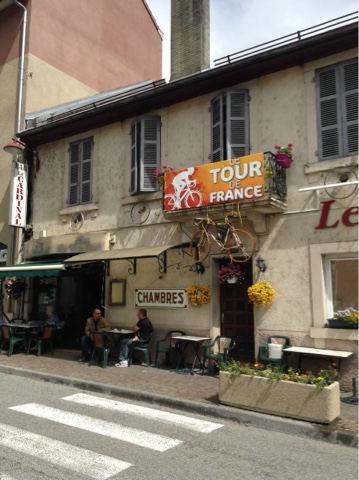 It was the first Ville Étape I'd visited this year with paintings of cyclists in shop windows done by an artist different from the one I'm accustomed to who travels to the Ville Étapea and then goes shop to shop dashing off a quick cycling-themed painting relevant to the shop convincing them it will be good for business.These were refreshingly realistic portrayals in contrast to the caricatures of the other. 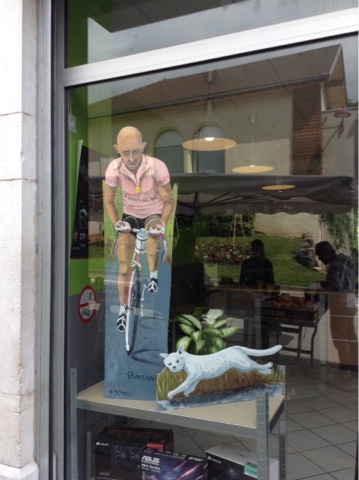 One featured a chicken.  I would have been stumped by its significance if I hadn't learned that the local breed is one of six gastronomical products in the Département of Ain to have protected status as an original of the region along with Bugey wines, Bresse cream and butter, and two cheeses, Comté and Blue de Ges. 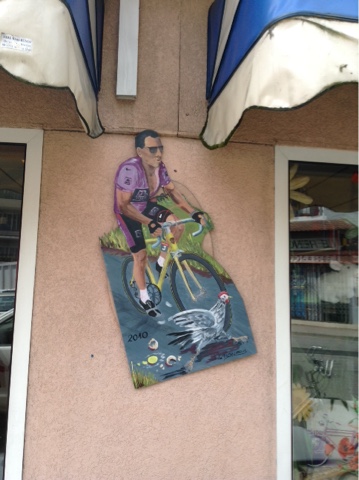 The chicken also had a roundabout to itself elsewhere in the Département on the road to Bourg-en-Bresse. 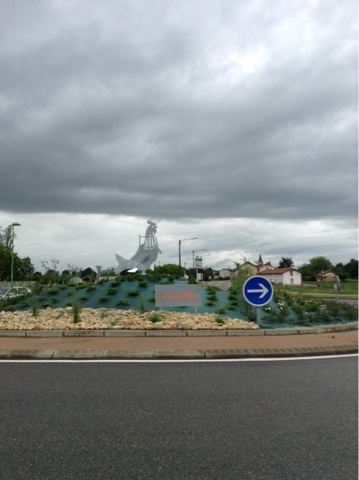 Bourg-en-Bresse itself honored gardening with a roundabout adorned with watering cans. 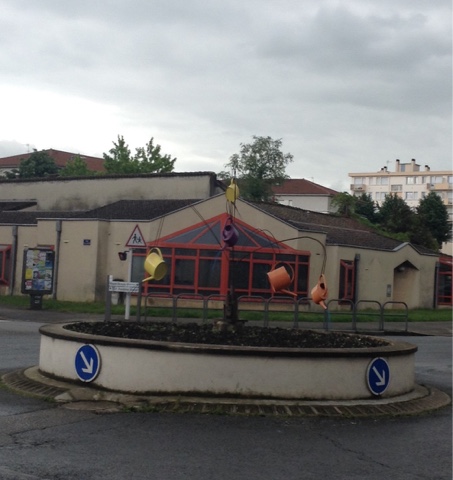 The Bresse chicken was one of eighteen attractions of Ain highlighted on the map of the Départment distributed by the tourist offices in the region, along with the multi-starred Michelin chef Georges Blanc whose restaurant is in the Départment and features the chicken.  The Aviary Park in Villars-les-Dombes and Le Grand Colombier also made the list along with La Maison d'Izieu, where a group of Jewish children were murdered by the Nazis in 1944.  As with any of France's 95 Départements, I could have spent days visiting all it had to offer, but I only had time for those linked with Tour Towns.  There are always ample reasons to return to any region of France.

I slipped out of Ain into Jura to check in on Morians-en-Montagne, start of the sixteenth stage that will take the peloton to Berne in Switzerland for three days, including a rest day.  It had a minimum of decorations other than a rather odd large metal scaffolding with four large posters on each of its sides promoting The Tour.  It was constructed around a large fountain with four spigots spouting "eau non-potable" in front of Morians grand city hall. 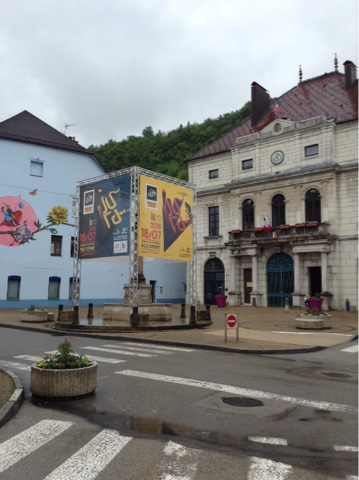 I won't be returning to Moirans, as it would entail a fifty-mile transfer over several passes from the previous day's finish through the Juras.  The mountainous terrain made for a most pleasant ride pre-Tour when I wasn't pressed for time, but I'd have to ride well into the night to complete the transfer during The Race.  If I were to make the transfer, I'd have a better idea where to camp than I did two nights ago.   I was caught by rain late in the evening as I delayed making camp to finish off a long descent from a 3,500 foot pass trying to get down to warmer temperatures. I was forced to make do with a less than optimal campsite in a gorge beside an abandoned hotel/restaurant.  I was hidden by a cluster of drooping trees, which also somewhat sheltered me from the rain as I set up my tent, but I was too close to the road to have a night of uninterrupted sleep.  If it hadn't been for the rain I'd have escaped the gorge in less than a mile and could have disappeared down a dirt road into a forest for a night of quiet.

It was my third straight day of rain.  It's been causing flooding and also playing havoc with the French Open in Paris.  I couldn't talk long with Janina from Chambery later in the day as thick threatening clouds hovered in the mountains surrounding the city.  I didn't want to have to crawl into my tent dripping wet again, though I at least had a chance to dry out my tent and gear earlier in the day when the sun made an appearance.   It was thirty miles to Albertville, the next Ville Étape and host of the 1992 Winter Olympics, riding alongside the L'Isère with mountain ridges on either side.


Posted by george christensen at 9:47 AM