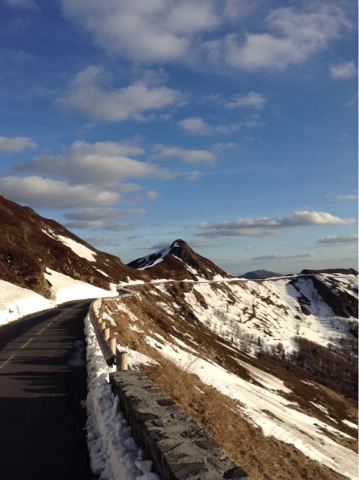 My route to Cannes this year has been more demanding than usual.  As always it has been dictated by intersecting with the route of the impending Tour de France so I can acquaint myself with some of its Ville Ètapes.  It just so happened that this year instead of being able to take a relatively flat route through the center of the country and linking up with the Rhone Valley leading into Provence and on to Cannes, I have been drawn up on to the Massif Central and ended up crossing its highest pass, the Pas de Peyrol, at over 5,000 feet, to take a look at the Puy Marie, a stunning extinct volcano that is on the list of "Grand Sites of France." The Tour de France occasionally includes it on its route.  The last time was in 2011.
Instead of being able to dwell on all the cinematic riches that await me at Cannes and reflecting on my wealth of twelve years of Cannes memories, my thought has been preoccupied with the rugged climbs ahead and how far down the road I must get each day to arrive at Cannes in time for all its festivities.  This has turned into more of an adventure rather than a mere commute to the festival.  I've been riding until beyond eight p.m. nearly every night and taking only short breaks, limiting my reading time.  No complaints, as any time spent on the bike is time well-spent.  I'm happy to be in semi-Tour mode putting in long days and poring over my map knowing I need to get a certain distance each day to arrive at Cannes in time to meet Ralph and also to have the time to stop off and visit Craig and Onni.  I end my days with an extra sense of accomplishment and well-being.  It's eat and then to sleep.
I was under pressure to get up and over the Pas de Peyrol before dark, as it was too cold for my sleeping bag to camp among the snow fields at its summit.  I wasn't even sure if it was going to be possible to cross it at all, as for miles road signs warned it was closed and a barrier blocked the road four miles from the summit. 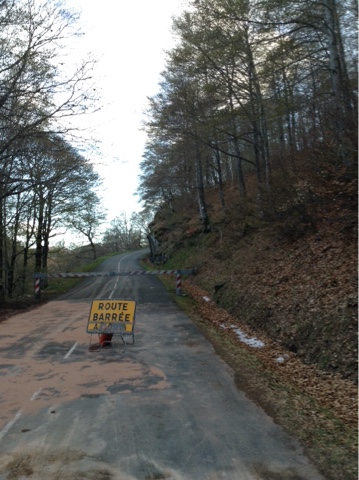 I had already gone over a 4,000 foot pass with patches of snow along the road.  I trusted that there couldn't be that much more one thousand feet higher, and what there might be I ought to be able to push my bike through.  I have learned over the years not to trust the road closed signs in France.  They usually apply to road construction that bicyclists can get through.  I had already successfully ignored such signs twice on this trip, sparing me long detours. I had known for miles I would have another opportunity.  I was in Puy country with volcanic cones dotting the Massif. 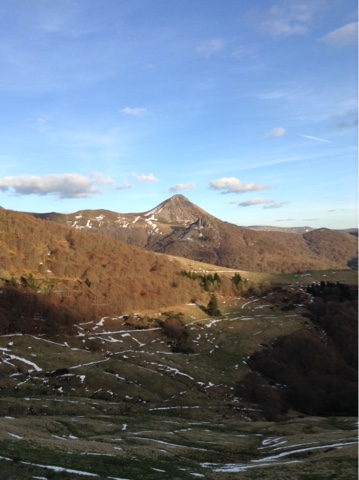 When I passed the barrier the suspense truly began to mount, as well as the thrill of having a road surrounded by great beauty all to myself.  About a mile later I heard the approach of motorcycle from behind me.  My heart plunged that a gendarme was after me, but it was only a teen who zipped by without acknowledging me in any way. That was s promising sign.  Hopefully he knew what he was doing and I wouldn't see him again in a few minutes.
After another mile the grade steepened to a ramp for the final two miles.  I stood up on the pedals thrusting my legs downward with all my might.  I was soon gasping from the effort.  I kept at it, heartened that there still wasn't much snow and what small banks of snow there were along the road showed signs of plow cuts, indicating that the road hadn't been totally closed down for the winter.  As I strained, I fought off the urge to resort to my 24 inch (as in two feet) gear and get off and walk. It was a gear I had only just learned about from Léo Woodland's comprehensive and witty primer on touring archived at the crazyguyonabike website.  Léo is Les Woodland's French pseudonym.  He has lived in France more than fifteen years.  He goes by Léo in France as Les as the plural for "the" causes confusion. He has also adopted Léo as his byline for his writings on touring which includies a delightful book about bicycling across the US, "Sticky Buns Across America." He has also contributed diaries of several of his tours in France to crazyguy as well.
Though I didn't use my 24 inch gear, I did pause to let the pounding in my chest subside.  I couldn't delay as night was imminent.  I pushed on to reach the summit by eight with the light brilliantly illuminating the scenery all around.  The road remained clear, though it continued along a ridge below the Puy Marie and turned a bend before making its plunge.  I couldn't tell if it were swallowed by snow at the bend.  Thankfully not.  It was clear sailing.  I put on a sweater and wind-breaker and exchanged my cycling gloves for real gloves and then began a frigid ten-mile descent to the valley where I found a perfect place to pitch my tent beside a brook in a clump of trees.
Another steep climb, but of only three miles, awaited me.  It took me over a ridge into another valley that led to the ski resort La Lioran, the Ville Arrivée for stage five of The Tour.  It was up and over another pass in the opposite direction from Cannes.  I did not have the time to give it a preview, but instead headed down valley to Arpajon-sur-Cère, one of sixteen first time Ville Ètapes in this year's Tour, perhaps the most ever.  It is a suburb of Aurillac.  It did not have a tourist office and had yet to mount any signs or banners or bike sculptures to celebrate its status as a Ville Ètape.  It was down off the Massif Central, but I still had some hard riding ahead of me through the Cevannes and over a better than 4,000 foot pass by Mont Aigoual to reach Craig and Onni 125 miles east of Aurillac.I feared that if the climbing were too strenuous and time-consuming I might have to head south to flatter terrain and miss them.  There was no time to dally or let my legs recover.  Fortunately my winter training in Taiwan had them in good stead.
Posted by george christensen at 7:46 AM