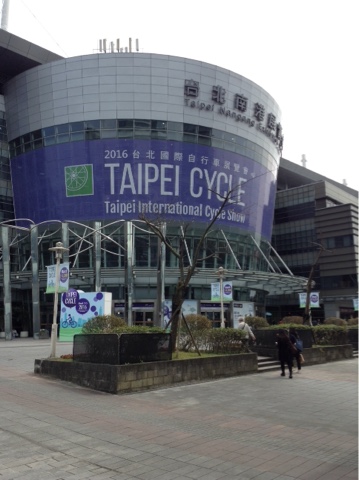 On the fourth day of the Taipei International Cycle Show I joined the throngs of common citizens allowed into this huge trade show on its final day.  Up until then only industry folk were permitted to peruse the offerings of over a thousand exhibitors from all over the world.  It was only eye candy for the public, as there is no merchandise for sale, other than by order, or any freebies other than literature and candy and maybe a water bottle or pen. It was an overwhelming task to cover it all, spread out on four floors of the Nangang Exhibtion Center on the east side of Taipei.

Taiwanese companies, led by Giant, the largest manufacturer of bikes in the world, and Kenda, the largest manufacturer of tires, naturally dominated the event, filling one floor entirely and intermingled with the companies from overseas on the other floors as well.  Giant grows stronger and stronger.  It's nine factories in Taiwan, China and Europe produced 6.6 million bikes last year.  It manufactures bikes for other companies, but seventy per cent of its production is its own brand.  The average cost of its bikes has risen to $800.  Kenda, too, is a gorilla in the industry, turning out a quarter of a million tires a day.

Without an industry pass dangling from my neck I was largely ignored as I systematically wandered the grid of aisles.  Most of the products were standard components and accessories with just a few oddities.  One booth was largely devoted to bells. 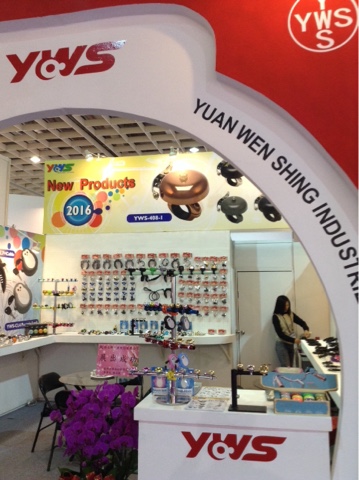 A local pannier company had a line of bags for carrying dogs adorned with a dog bone. 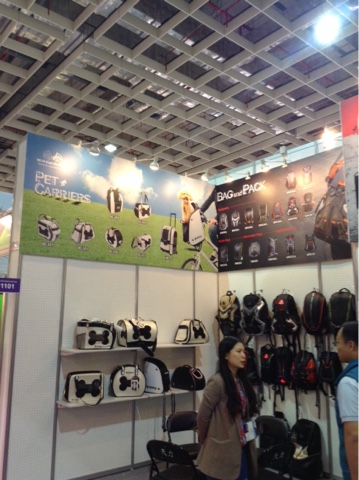 A few booths had someone with a microphone giving a demonstration or a pitch of some sort, but it was all in Chinese.  A few had an Asian cyclist sitting at a table signing autographs, none of whom I recognized.  Some booths tried to attract attention with a pretty girl. 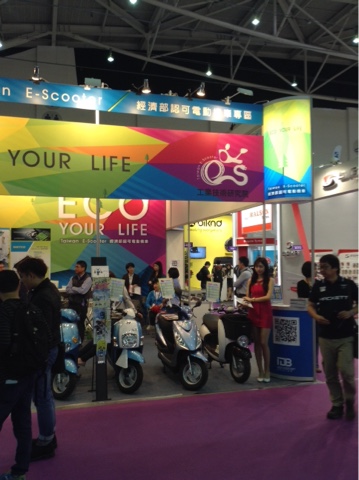 More popular though as attention-grabbers were flowers. 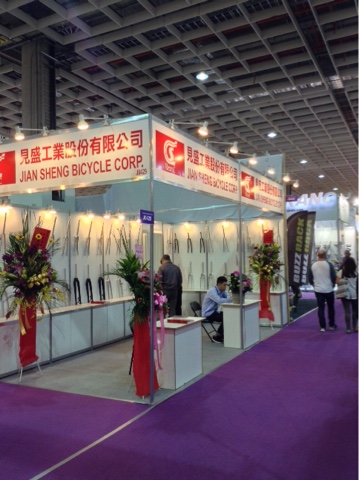 Catchy phrases vied for attention--"Perfection is an attitude," "Bringing bikes to life," "Structural integrity," "Active intelligence." It left me pretty much in a daze until I took the escalator to the fourth floor where the companies from overseas with familiar names were stationed.  Trek and SRAM and Sigma and Zefal, who I feel as if I know personally having accompanied me to the distant corners of the planet, each gave me an lift.  There was no Eddy at the Merckx booth, other than his photo, but it brought back fond memories of being in close proximity to him last year in Oman.  None of the bikes or parts though had me lusting for anything other than to be on my bike.

I stuck to my mission though to see it all.  The Brompton booth was promoting a contest for the public to submit fifteen second videos of riding their folder in urban environments.  Larger than life-sized photos of Rohan Dennnis, Philipe Gilbert, Geraint Thomas and a few other stalwarts of the European peloton graced a few of the booths.

I took a couple of breaks to rest my legs and to give a scan to the daily magazine published promoting the event.  They were full of glowing good news.  Taipei had just hosted Velo-City, the world's biggest bicycle advocacy conference.  It was the first time it had been held in Asia. Taipei's 56-year old cycling fanatic mayor, Ko Wen-je, helped lure it to his city.  He had just completed a 323-mile ride from the top of the island to the bottom in 28 hours in remembrance of the 30,000 dissidents who died in an anti-government uprising on Feb. 28, 1947.  February 28 is a national holiday.

Another story trumpeted the increasing popularity of bike-sharing programs.  Europe leads the way with 500 cities followed my Asia with 400, 100 in the United States and Canada and 25 in South America.  Giant spearheaded Taipei's program and intends to expand elsewhere.  The 82-year founder of Giant plans to retire at the end of the year after 45 years in the business so he can devote himself to such advocacy work.

I saw quite a few of Taipei's orange rental bikes in use taking advantage of the fine network of bike paths in the city.  The Danshuei River and its two tributaries, the Keelung and the Xindian, who frame the central part of the city, each are bounded by deluxe bike paths on both sides of their banks.  They go on for miles.  The riversides are wide enough in spots for parks and baseball fields.  They add great luster to this urban environment.  The central part of the city is flat enough to be laid in a grid.  There was more order and less chaos than any other Asian city I've biked.  I couldn't help but think of how much messier it had been to bike in Bangkok, Beijing, Mumbai, Delhi, Manila, Hanoi, Tokyo and others. A protected bike lane was an unimaginable luxury for Asia, and here I was sharing it with rental bikes and headed for what had been the tallest building in the world from 2004 to 2010 when it supplanted Chicago's Willis Tower as the tallest until losing the honor to Dubai. 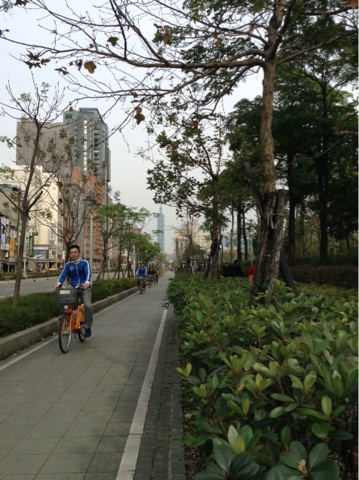 Taipei 101, named for the number of floors it has, was designed to resemble a bamboo stalk. 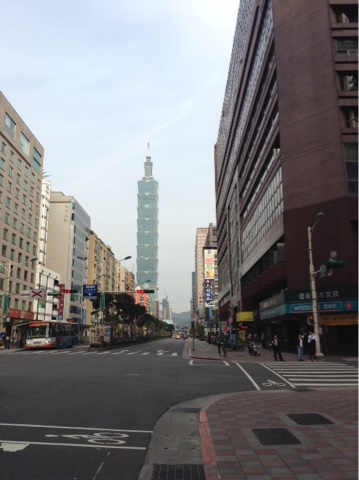 A few miles from Taipei 101 is a large park with the controversial Chiang Kia-shek Memorial Hall built in 1980 before a reconsideration of his career twenty years later began a period of deChiangification. 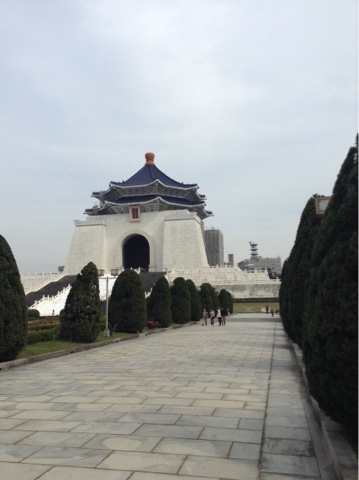 His statues came down all over the country and things named for him were renamed, including the international airport. Efforts were even made to rename his memorial, but those were thwarted.  One wouldn't know he was reviled by many, as this four-story memorial was mobbed and it paid full tribute to the founder of Taiwan and its president for 26 years until his death in 1975.  A gift shop inside is called "Cheer for Chiang." 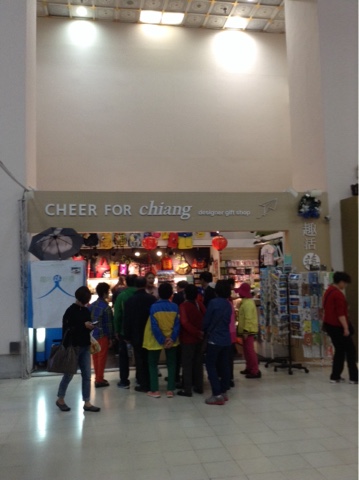 On the fourth floor of the monument is a Lincolnesque statue that is granted an honorary military guard. 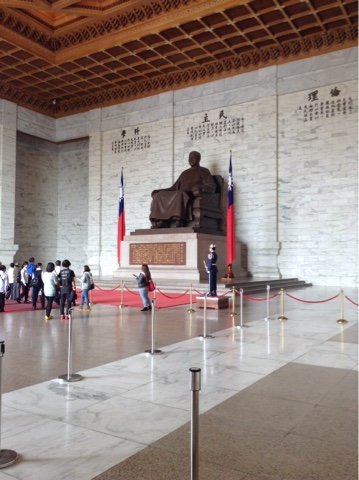 Every hour there is an elaborate changing of the guard. 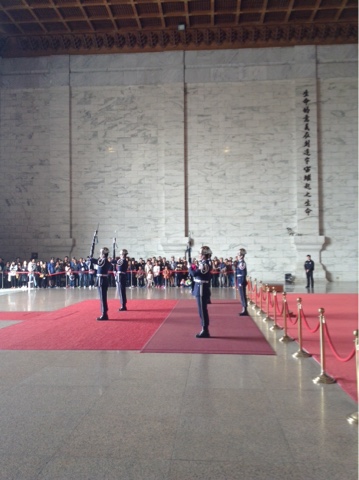 It wasn't the only changing of the guard that I witnessed in my two day's of sightseeing in Taipei.  The other was at the National Revolutionary Martyrs' Shrine honoring those who died in various 20th century rebellions on the mainland and in Taiwan.  It embraces China's history as its own, as it considers Taiwan the real China, just waiting for the opportunity to retake the mainland.  The changing on the guard there went on for a full twenty minutes as it included two pairs of guards, one at the entry of the complex and then the other at the main building a couple blocks away.  The crowd of spectators marked along with the five soldiers, some of them imitating their arms swings and struts. 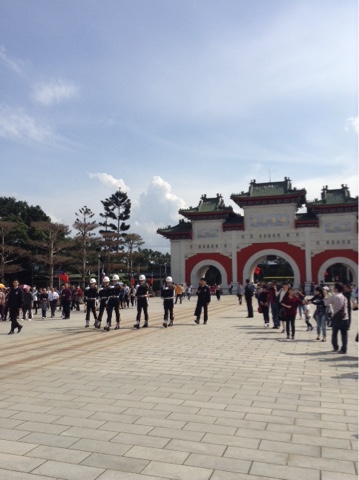 As at the Chiang Kai-shek Memorial, they twirled their rifles and stomped their boots in unison while maintaining a grim-faced expression. 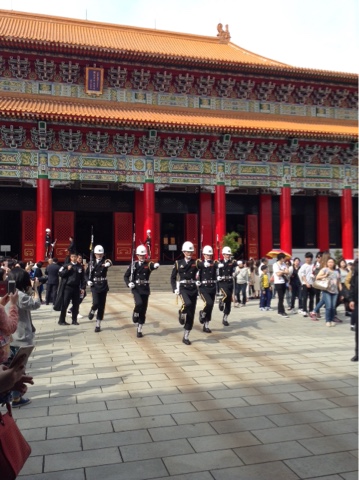 With luck in the days to come I'll have another changing of the guard to witness at the Generalissomo's mausoleum in a small town fifty miles to the south.

I completed my tourist duties with a visit to the vast National Palace Museum and its incomparable collection of several milliniums of Chinese art--jade, bronze, porcelain, calligraphy, paintings and more. 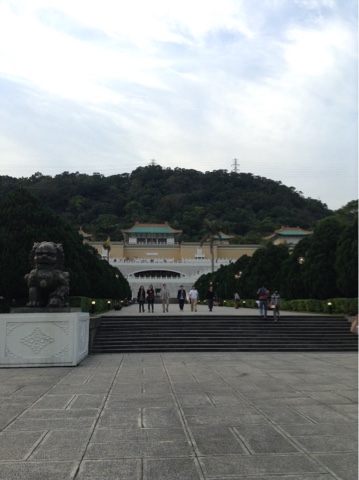 Janina would have been in ecstasy, except maybe over its special exhibit of artefacts from the Vatican--vestments and chalices and sundry, including the quite large red shoes of John Paul II.  One set of rooms was devoted to an extraordinary animation of the paintings of Giuseppe Castiglione, a Jesuit painter who lived in China in the 1700s.  His nature paintings were brought to life and reinterpreted on screens with chirping birds and fluttering peacocks and horses.  Much effort was also put into a 22-minute video of talking dogs and birds and other animals.  It was partially an exercise to showcase the animation abilities of the Taiwanese, but also as a tribute to Castiglione.

The museum was mobbed on a Saturday afternoon and stayed open until eight p.m.  Most of those in attendance were in groups accompanied by a guide.  Unfortunately there was no English to eavesdrop on, though the displays were all explained in quite sensitive and well-written English, worthy of Janina's pen.

Posted by george christensen at 3:53 AM