It wasn't until my fifth night of camping on my Round Taiwan Odyssey after over 350 miles of pedaling that I was able to pitch my tent on a beach, or at least in the seclusion of some trees right alongside a sandy expanse.  I'm circling an island.  I ought to have shoreline camping every night.  Alas no.  Curiously, the western leg of the Round Taiwan route doesn't hug the coast, but chooses roads inland, until the route closes in on the southern tip of the island and has no choice in the matter.

The choice of going interior wasn't of scenic consideration, as it has been one long non-stop slog through urban sprawl, but rather choosing roads with a bike lane and the right amenities. I've felt as if I've been riding Ogden Avenue out of Chicago all this time.  It has been unrelenting concrete of one form or another.  I'd given up wondering, "When does the countryside start?"  At least the physical act of the endeavor has been pleasant on a wide bike lane with little change in altitude and generally a light tailwind and cool temperatures.

I'm still awaiting some countryside, but at least the route has become dotted with rice paddies and citrus and banana orchards.  And now that I'm within forty miles of land's end, the island narrows down enough that there's just one road between the coast and the interior mountain ridge, neither of which have been within sight until now.  The combination of mountains and coastline to gaze upon lifts the spirits considerably after days through a corridor of concrete.

My spirits had already been lifted when I gained a traveling companion for several hours.  I was gazing intently at the sign counting down the seconds until a red light turned green when I heard the voice of a young woman meekly ask, "Where are you going?"  There is always a cluster of riders on motor scooters at the lights, so I no longer pay them any attention.  This was a rare person though on a bicycle.

When I told her "Kenting" at the bottom of the island, she said, "Me too."  I glanced at her bike and noticed she had panniers, indicating she was on the journey I was.  If she had pulled ahead of me I would have seen the license plate-sized sign a friend had made her announcing "My bikeriding journey around Taiwan." 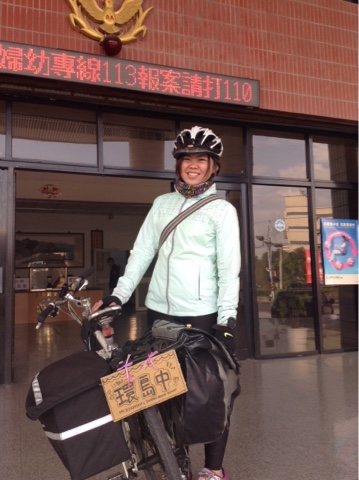 She was all bundled up, like all those on scooters, despite the 70 degree temperature.  I was in shorts and had my sleeves rolled up. For me it was balmy, warm enough to take a dip in the ocean at my campsite.   She was wearing tights and had a bandana around her neck that she pulled up over her nose as she rode to avoid breathing in the fumes.  It was a nice contrast to the surgical masks many wear. 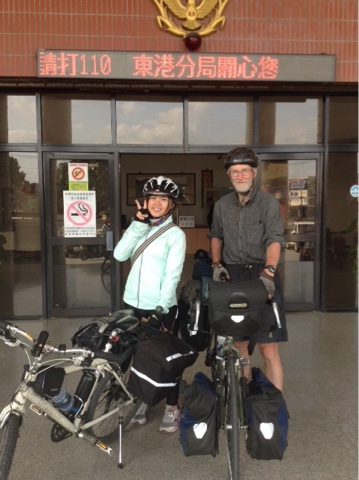 "Are you camping?" I asked.

She was inspired to do the ride because so many of her friends had.  She knew nothing about the movie "Island Etude" about such an adventure that is given credit for sparking this craze.  She immediately pulled out her phone and typed it in, then said she'd have to watch it when she returned home.  She was a runner, not a biker, and was riding a bike she had rented from Giant.  But having run a marathon, she was fit and could endure.  She was riding at my pace, so we tagged along together for the rest of the day.

Our first break came an hour later at one of the police station service centers on the route.  I have come to look forward to them as they have been my only source for WIFI so far.  McDonald's, unlike elsewhere, does not offer it, nor have I decoded the local designation that restaurants or businesses might have advertising that they provide it.  Besides WIFI, the police stations provide cold water and have a pump.  So far though, none have come with an English speaker.  It has been rare to find one anywhere, so it was a great gift to have come upon one to ride with.

She proved her authenticity as a local when her food of choice at a convenience store we stopped at later was a baked sweet potato.  The Family Mart chain, in contrast to the more common Seven-11s, offers them.  The sweet potato is such a favorite of the Taiwanese that they distinguish themselves from the mainland Chinese by saying, "I am a real Yam."  I am partial to the Family Mart as well, even though Seven-11 was a strong backer of cycling back in the '80s and even sponsored the first American team in The Tour de France, as it doesn't charge as much for its hot dog buns.  I was startled that I was charged an extra thirty cents for my first 90 cent hot dog, as I didn't realize that the bun wasn't included in the price of the hot dog sitting in an enclosed grill such as one sees at gas station mini-marts back home.  Both stores though have a cauldron of hard-booked eggs simmering in  tea turning them brown for thirty cents. I eat several a day, adding them to the Ramon noodles the stores all offer along with boiling water to cook them. 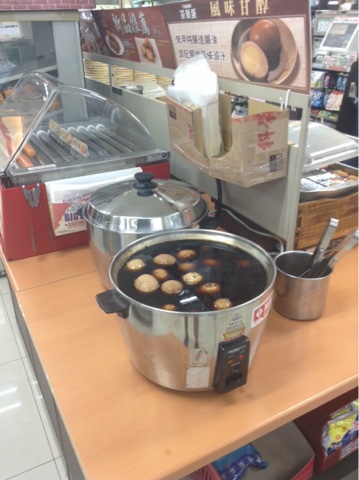 One of the first questions I asked Jeana as we were riding along was if she ate many eggs.  It was a word I couldn't make her understand.  She has to resort to her phone from time to time to find the English word that isn't in her vocabulary.  I was sorry to bid her farewell when it grew dark.  She had to ride another fifteen miles to the town with the next hostel.  With luck we'll meet up down the road.

Posted by george christensen at 5:49 PM

Thanx for your descriptions of travels. As you know I pale in comparison to you. Recently while biking on Cambodia, the brown eggs I got were duck eggs. The embryo was have developed. After that I request Ed chicken eggs through Google.

Bob: I had that same experience in Cambodia and was slightly concerned what I would find when I cracked into these eggs, but fortunately there was no surprise. Look forward to hearing about your travels in Vietnam and Cambodia when I return.