One of the surprises of Lebanon has been its currency--the US dollar along with the Lebanese lira.  I didn't believe it when Annia told us before we left that there was no need to change money when we arrived at the airport, saying US currency is accepted everywhere.  If we hadn't known and had gone to an ATM machine, we would have seen that we had the option of withdrawing either dollars or lira. Its been 1500 lira to the dollar for years, so even though most prices are listed in lira, it is an easy computation to determine the dollar cost of an item.  So far Annia has been right.  No one has rejected my payment of an item in dollars, though I'm always given lira in change.
When I asked a Syrian refugee if dollars were a dual currency in her country as well, she laughed and said, "If I had a ten dollar bill in my pocket in Syria, I'd be thrown in jail."
That was her only burst of emotion as she and her husband shared their experiences of life in Damascus until two months ago when they were finally able to escape Syria.  We were sitting in their apartment in Beirut along with two of their four young children and her brother Ahmad, who had preceded them to Beirut two years ago.  Among his many jobs he has worked since arriving was a stint as a bicycle messenger, by far his favorite.  So much so that when he and his family gain visas for Canada to join other members of his family, he plans to work as a bicycle messenger despite his degree in engineering.
Ahmad is a friend of Annia's and occasionally serves as her Arabic tutor.  He was going to join us on our ride to Tripoli.  We had to delay the ride when Janina suffered a case of food poisoning.  While Janina spent a day sleeping and recuperating, Ahmad and I went for a ride of our own.  Before we left the city we stopped off to see his sister and her family.  His sister worked as a pharmacist in Syria and her husband as a dentist and had enough money to afford a $900 a month apartment rather than ending up in a refugee camp.
They were able to slip out of Syria by buying airplane tickets to China for their entire family.  Since there are no flights from Damacus to China, they had to fly out of Beirut, and were allowed out of the country under such a pretence.  Ahmad had gained entry into Lebanon in a similar manner by purchasing a ticket to Thailand, which he likewise never intended to use.  They were able to recover most of the cost of the tickets, but not the money they spent for visas.
The family had had a nice life with a house in a suburb of Damacus up until war broke out.  They had to leave their home two years ago when their suburb lost all electricity and water and it became impossible to buy food.  They had been living in a series of apartments since then.  They matter-of-factly narrated their tale with nary a trace of rancor or bitterness.  Their soft features and gentle voices were accentuated by the smiles that never left their faces.  It wasn't so much the relief they feel to be in Lebanon, as they continue to live in uncertainty while they await authorization to immigrate to Canada, but rather their natural constitution.  Living in limbo is nothing new for them, as they are Palestinians who never had full rights in Syria.
They could only bring along a few of their belongings on their long taxi ride out of the country to Beirut.  It wasn't easy to find someone to drive them, as one can be hung up at the border for twelve hours or more as they await permission to leave.  Among the possessions they had to leave behind was a bike. Ahmad knows the importance of having a bike so was able to purchase a used Trek for $40 for the children.  Ahmad is front and center. 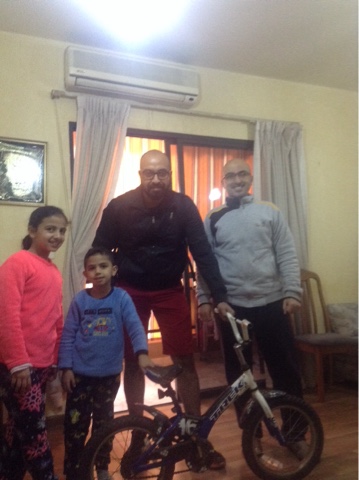 As Ahmad and I prepared to go, the three-hours of electrical blackout that daily blankets Beirut had commenced, so we walked the six floors down back to our bikes.  Our next destination was Sabra, the Palestinaina refuge camp dating to 1949 with the establishment of Israel.  Even though it is an established neighborhood within the city, the Palistinians cling to the term "camp," as something temporary, than what is truly is, s slum or ghetto.  As we approached Sabra, Ahmad pointed out an apartment he had stayed at for $200 a month when he first arrived in Beirut and also the street where Yassar Arafat had once lived.
As I clung to Ahmad's rear wheel as we sped through the traffic-clogged streets weaving from one lane to another, I felt as if I were watching a YouTube messenger video peering over Ahmad's shoulder.  It might have been terrifying and death-defying to some, but I fully trusted Ahmad's instincts and felt exhilarated as we flew through the maelstrom as if we had super-powers or were beings of a superior intelligence.  I clung even closer as we entered Sabra, but it was easier to keep up as automobiles were replaced by motorcycles and pedestrians on the narrow thronged streets.  All around us was a bustling hive of activity people selling things from carts and small stands and shops.  Several blocks in we turned down a smaller alleyway and came to a bike shop where Ahmad was well known.  My fold-up bike was a genuine curiosity.  The conversation was entirely in Arabic, other than Ahmad's translations.  While we were there several of Ahmad's students from a school he had taught at nearby happened by.  Ahmad enlisted one to take our photo.

After we left Ahmad said, "I told them you were Norwegian.  It is better."  Danish would have been more accurate, but Norwegian gave me extra favor as several Norwegian aid organizations serve the Palestinian community and they are accustomed to seeing Norwegians.  Ahmad knows about the use of having alternate nationalities, since he can go by Syrian or Palestinian, though neither carry much favor in Lebanon.
I was tempted by the aroma coming from the food offerings, but Ahmad said it was best just to avail us of bananas in Sabra.  After we left we came upon a food cart with a variety of pastries including a coup,e of types of date cookies.  Annia had already introduced us to the store commercially packaged version.  They were a tasty treat that I make sure to have in my pack.  Annia too never goes out without a handful as that is what she distributes to the beggars.  But these from the cart were an even greater treat.  They provided us with our fuel for the rest of the day. 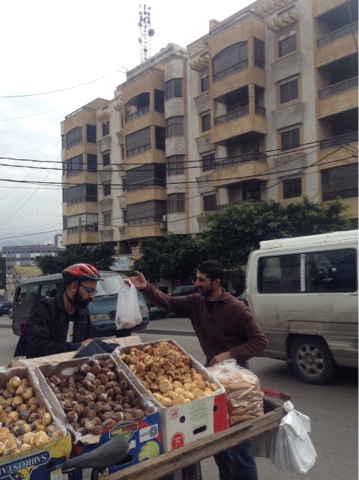 The traffic at last thinned and we could ride hard and steady as we headed south out of the city past the airport.  We alternated between the bustling six-lane highway with a nice shoulder and the quiet, but rough side road.  On the side road we passed through several military check points.  We were waved on through, assumed to be no threat.  Such has been Ahmad's experience all over Lebanon.  We pushed on for an hour-and-half to shortly before Sayda, about half way to Israel, before we had to turn around to get back to Beirut before dark.  The hillsides weren't as packed with habitations as they were to the north.  We didn't encounter another cyclist all day, but we were told about a Syrian we lived twenty miles south of Beirut who made the commute to his job in Beirut every day and he was an old guy like me.
We had a strong south wind back and flew along at close to twenty miles per hour.  We passed through two tunnels that were a bit perilous.  Ahmad had never experienced them adding to their peril, not knowing if there were any hazardous grates that can pop up anywhere.  Along the way a motorist slowed to wave at us.  It was a messenger friend of Ahmad's who I had also met.  He was sent on s long delivery in the company car.  He was as surprised to see us as we were to see him.  He would have gladly exchanged his car for one of our bikes, but that wasn't going to happen, nor his offer of giving us a lift back.  We were sorry we arrived back at Annia's fifteen minutes before dark and hadn't pushed a little further south before returning.  It was good to learn though that Janina had slept all day and felt recovered and ready to eat.  The forecast calls for clear weather next week, so we will not be denied Tripoli.
Posted by george christensen at 12:19 PM