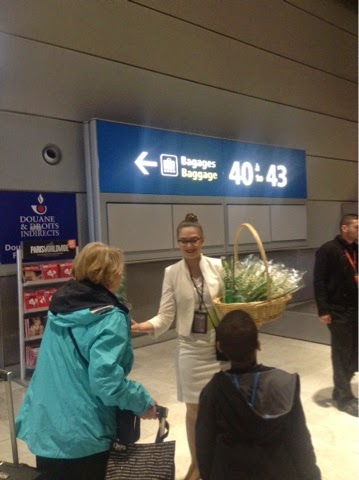 As I was awaiting my bike box at the oversize-luggage area of Charles de Gaulle airport in Paris, a woman bearing a tray of flowers presented me with a small bouquet and a welcome to France, another of those small, caring features that makes France a place unto its own.  Giving flowers is a May Day tradition in France that just about everyone participates in judging by the numerous stands I passed along the road selling flowers as I cycled through the city.

I was delighted at this presentation of flowers, as my first destination was the grave of Octave Lapize, winner of the 1910 Tour de France.  I had been to the graves of seven other Tour winners, and not once had I come bearing flowers.  Lapize was especially deserving of such a gesture, as he had died in the service of his country, shot down by the Germans during the First World War.

Flowers weren't the only welcome gift I received.  A woman by the name of Monique, who oversees baggage claims for Air France, also welcomed me just as I completed assembling my bike and was about to make my departure. She was attracted by my loaded bike and curious about my plans.  She asked if she could assist me in any way before I was on my way.  She was happy to escort me to a shop where I could activate my dormant French SIM card in my mini-iPad.  As we walked through the crowds, she enthusiastically queried me about my travels.  The shop that handled telephone service was a general merchandise store selling all manner of souvenirs and snacks and reading material.  It was swamped, but Monique gained me priority service.  They sold me whaf I needed but they left it to us to phone the provider to activate the card.

We returned to Monique's office back in the baggage claim area, going through the exit doors that only officials are allowed through.  As she was on hold with the telephone service, she also tended to a couple of passengers whose luggage had been lost.  Then she took me back upstairs to give me precise directions on bicycling out of the airport after I had rejected her encouragement to use a free bus shuttle.  As she continued to express interest and amazement at my cycling around France over the years, I validated her interest by sharing with her a couple of the French newspaper stories written about me over the years that I had stored in my iPad.  One mentioned my blog.  She was delighted to learn that she could keep up with my travels.  She made my day and I no doubt made hers.  I pedaled off certain that I would seek her out whenever I'm at DeGaulle.

I was in no great hurry to leave the airport, as a drizzle had been falling since my plane touched down.  A couple hours later it was still dark and drizzly.  Not only was it wet, but it was cold, just fifty degrees.  For the first time in the twelve years that I have been coming to France in May for the Cannes Film Festival and The Tour de France, I had to wear tights as I began riding, and booties as well.  Just a few days before I had been riding in similar cold, wet weather on a two-day outing to Midewin National Prairie, about sixty miles outside of Chicago, with Janina, Tim and Carol.  The rain was heavy enough on our second day returning home that we resorted to a train for our return.  I had no such temptations here.

I was too happy to be back cycling in France to think this rain was my penance for having taken the train at all.  I was happy that it had further thinned the traffic, as May Day is an official holiday in France, as I negotiated the urban network of roads that led to the Communal Cemetery of Villiers-sur-Marne in the southern sprawl of the Paris metropolis of over ten million people.  It was twenty miles from the airport, including several inadvertent diversions.  With all my GPS consultations it took over two hours to find my way to the cemetery.  I was in no rush, so I suffered a minimum of frustration, just happy to be closing in on the cemetery every time I stopped to verify my whereabouts, even though it meant a few drops of precipitation on my iPad each time.

There was no map of grave sites at the cemetery nor an office dispensing such information.  On a rainy day I doubted there'd be anyone else visiting the cemetery who I could ask, so it looked like I had a daunting task ahead of me to find Lapize's grave when I surveyed the vast cemetery. 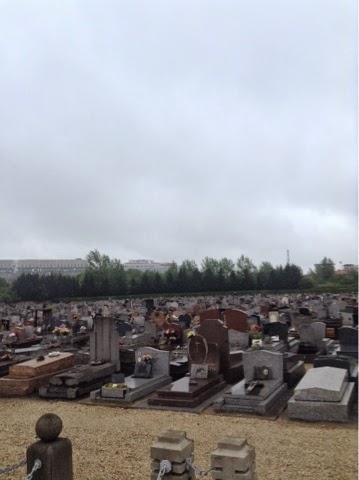 But then I noticed a woman in the distance.  As I headed in her direction to ask if she knew the whereabouts of Lapize, I glanced at the names on all the graves I passed.  About halfway down the aisle I was following the figure of a cyclist atop a grave ciaght my eye, and I felt as blessed as I had been at the airport.  Less than five minutes after arriving at the cemtery I had found the grave I had come looking for, the easiest of all my Tour graves other than that of Bobet, which Craig and I had been led to by the couple that lived in his childhood home. 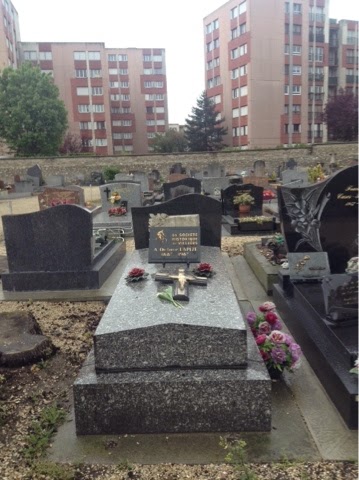 As with all The Tour graves I have visited, other than those of the Italians Coppi and Pantani, who had grandiose tombs, this was a modest grave that didn't stand out from those around it.  Even that of  five-time winner Anquetil blended in with all the others in his small-town cemetery.  I laid my sprig of white flowers on the grave and paid silent homage to this champion.  There was no mention on the grave of his famous utterance in 1910, calling The Tour organizers "Assassins," for sending the riders into the Pyrenees for the first time.  It is one of the legends of The Tour.  No book on the history of The Tour is complete without recounting it.

I filled my three water bottles at the cemetery pump and then began my escape from the urban sprawl.  I didn't feel tired despite my minimal sleep on the flight over, but knew that I was.  I was prepared to make camp at the first forest I came upon when I had gained some distance from the metropolis.  That was another twenty miles. Along the way I came upon a bike path named for Bobet, three-time winner of The Tour in the '50s, the greatest French rider until Anquetil and then Hinault came along.  His museum that I visited several years ago in the town where he is buried said that there are over ninety streets and plazas bearing his name throughout France. 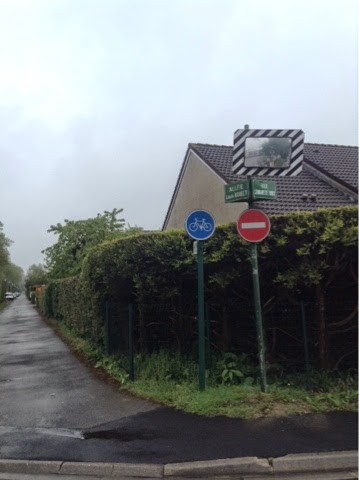 I couldn't pull into the forest immediately as there were a series of white vans parked along the road, portable bordellos.  Just off National Highway 4, a quick drive from Paris, beyond the exit ramp for Ozoir-la-Ferriera on D471 I was riding, I came upon an encampment of six or seven of the vans, giving customers a variety of girls to choose from.  Usually the vans are alone, not wanting competition.   I had never seen such a cluster.  One had to peer in through the windshield to survey the merchandise.
Even if it hadn't been raining, the women wouldn't have been standimg out along the road in their scanty attire.  Prostitution is legal in France, but solicitation is not.

It was a Friday night, but too early for any cars to be stopping just yet.  It might have made an interesting study to camp nearby and see what type of guy was attracted to having sex in the back of a run-down van, but I needed sleep. It is a topic I have never seen explored in a French movie.  This could be my long-awaited screenplay.  Maybe later.  It would give me the excuse to peer into one of these seedy vehicles.

A little further down 471 I came upon a barricaded path into the forest, my welcome to camping.  I ducked under the barricade and biked until I could no longer hear the traffic and ventured into the woods.  The ground was squishy from all the rain, but I found a patch of high ground between trees that wasn't too soaked.  I ate a couple of cheese sandwiches.  By seven I disappeared into an uninterrupted thirteen hour sleep. 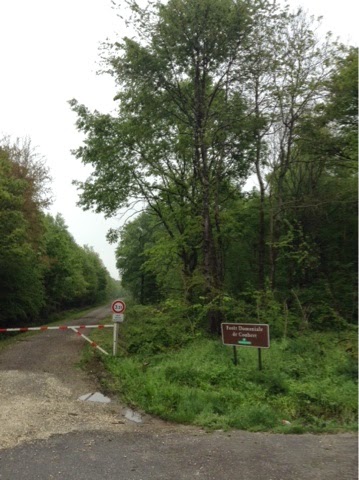 Posted by george christensen at 12:18 PM

Ladies and cemeteries already, you're off to a good start George.

What's your iPad charging setup this year? Did you bring your solar panel?

First three days were raining and the next two overcast so still seeking out cathedrals for my recharging. I can also charge the auxiliary battery that came with the solar panel at an electrical outlet. It takes several hours but can provide 90% of the iPad charge. Hope you make it over for The Tour once again and can see them in action.