Without course markers indicating the route of the race I had to rely on the race program map, which didn't precisely correspond to my GPS device, to find my way out beyond the outskirts of Dubai into the remnants of the desert terrain to watch the peloton scorch past me on stage two.  I didn't have to struggle to follow the race route yesterday, as I contented myself with simply witnessing the stage start and finish without riding more than a couple miles of the course. At The Tour de France it is riding the route decorated with bike art and packed with celebrants that makes being there so exhilarating.  There is none of that here.  Instead, this day's exhilaration would have to come from being the lone fan for miles and miles.

I had reached a distant point at about the half-way mark of the 125-mile stage two hours before the peloton was due.  I was hoping there might be a store or service station within range for a cold drink, but I had to settle upon a patch of shade amongst a row of stubby trees that had been planted along the road and the somewhat tepid water in my two bottles.  The temperature wasn't much more than eighty.    I had no concern of running dry, but a cold drink would have been nice after nearly three hours on the bike.  I had come through the city and had had another eyeful of the many exotic skyscrapers lining the roads of Dubai.  They weren't clustered in any central district, but rather went on and on in intermittent stretches. 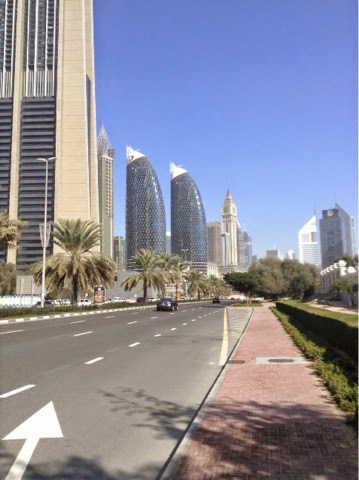 There seemed to be as many in various stages of construction as completed buildings. 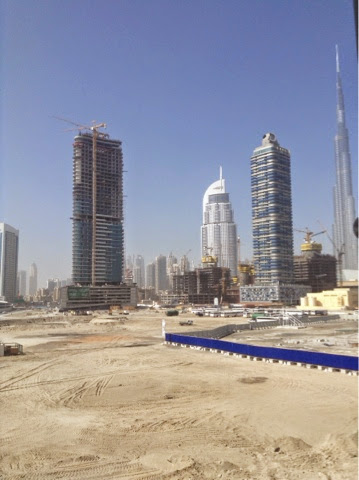 There were clusters too purely of construction. 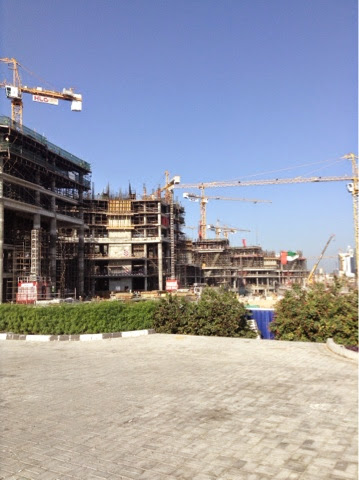 It is beyond my comprehension that there could be a need for so many towering buildings in a region that until recently had been without any.  The benefactors of all the oil money have to funnel their fortunes into something.  Providing offices for those with money to figure out what to do with it seems to be one of their foremost outlets.  It is a shame they don't build in places with genuine need of mere infrastructure, such as Haiti and Africa and elsewhere.  The opulence here is staggering.  And the world of bike racing is one of the beneficiaries, though not necessarily a deserving one.  There is no need for a bike race here, except to bring some attention to the place.  I am one of the few who has been drawn here for the cycling, though I am more interested in riding its roads than witnessing others ride.

As I awaited at least half of the eight-lane super highway alongside me to be closed for the racers, I began to be concerned that maybe the route had been altered or I had misread the map.  I checked again to confirm I was in the right place, comparing the race route to my Lonely Planet maps and a map a hotel had given me and my GPS device.  I seemed to be in the right place, though I couldn't. E entirely sure.  As the anticipated arrival time of the peloton according to the race manual approached and the din of the passing traffic hadn't been suppressed, I wondered if the route had been altered by some sheik who wouldn't countenance such a main thoroughfare being throttled for a measly bike race.

Eventually it became clear no bike race was going to appear on this highway.  That was disappointing, but I had still had a good day on the bike, riding roads I had never ridden before, even though they were roads that I wouldn't particularly care to ride again.  There were no alternatives behind the city.  In many respects it had been a nightmare of a ride. At some merging points with two or more entering or exiting lanes  I had to wait as long as five minutes for a gap in the non-stop surging traffic to cross to regain a shoulder and to escape my no-man's-land.  It wasn't much fun at all, unless one liked nightmares.

I could look forward to the next day though. It would be Friday, the Islamic sabbath when the traffic would be at a minimum.  Scott says that is the day that all the local cyclists ride.  He won't though, other than on the second leg of a triathlon that he is competing in, his second.

I had no chance to make it to the race finish back along the coast on one of the several man-made islands that are another of the hallmarks of the United Arab Emirates.  It wasn't like The Tour, where I would have been desperate to find a bar to watch the finish.  I happily meandered some more when I returned to Sharjah, one of the seven emirates that comprise the UAE, neighboring Dubai, where I was staying.  It doesn't compare to Dubai or Abu Dhabi in wealth, but it has its share of monumental buildings, including its majestic government building, framed by skyscrapers.  Its parkway was adorned with beds of petunias, the most popular flower of the region. 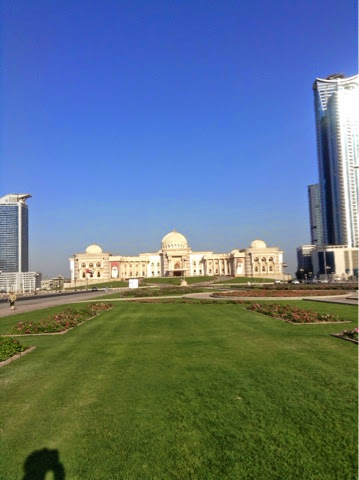 If I had made it to the race finish I would have been curious to see whether Cavendish had to force a smile when he took the stage to accept the leader's jersey once again, even though he had lost the sprint, finishing second to Sky's Italian recruit Elia Vivani, who came in third the day before.  Sky is taking sprinting seriously this year.  Cavendish showed he was vulnerable yesterday and today confirmed it.  He's certainly not striking any fear into his Tour de France rivals, the Germans Kittel and Griepel, and making them want to train a little harder.  They may regret they're not here, though if they were,  and were easily beating Cavendish, he would have been the one feeling a sense of urgency and rage to be in better form come July.  He has one more chance here Saturday on the fourth and final stage to show if he can be the force he once was.  Tomorrow on stage three he will be just fighting on the final climb to not lose more than a few seconds and retain the race lead.  It is seventy-five miles out of town.  It will be a challenge to arrive there before the racers, even with my daybreak start.

Posted by george christensen at 6:35 AM