May Day in France

While I waited for my bike in the baggage claim area for over-sized packages at Charles de Gaulle airport outside of Pairs, I was approached by a trio of women with trays of lillies.  They were passing them out to arriving passengers, observing a French May Day tradition.
Even though May Day didn't become an official French holiday until 1947, the tradition of giving out lillies of the valley goes back to 1560 when the knight Louis Girard presented King Charles IX with a bouquet of the flowers as a token of luck and prosperity for the coming year reputedly on the first of May.  The King so appreciated the gesture that he continued the practice the following year, giving lillies to all the ladies of his court, and thus was the custom established.  Now throughout the country people give the flowers to friends and families on this worker's holiday known as "Fete du Travail" in France.   All along the road for the rest of the day I passed stands selling the flowers.
Though I didn't encounter any of the May Day parades that are staged in many French towns, I well knew it was a holiday by the many cyclists taking advantage of the holiday.  Most were older men all decked out in Lycra and wearing tights.  The 60-degree temperature seemed warm to me coming from the 40s in Chicago.  I was the only one wearing shorts, though I had to concede to the cool the next couple of days when it didn't even get to 60, and put on tights myself, something I've rarely had to resort to in my previous travels the past ten years here bicycling down to Cannes for its Film Festival and then following The Tour de France.
Men cycling in racing regalia is such an emblem of France that Peter Mayle made it an element of his novel "Hotel Pastis" that I had begun on my eight-hour flight over the Atlantic.  Although the novel mostly focuses on a London advertising executive who quits his profession and moves to Provence to open a hotel, a subplot is a gang of eight who rob a bank on a holiday and make their getaway on bikes dressed in Lycra, fitting in with the many other such cyclists on the road.  None of the robbers are cyclists, so they spend months training before their big heist.
As in all of Mayle's books on Provence, whether non-fiction as his first "A Year in Provence," or fiction, they express a great affection and understanding of the many nuances of France and the French.  He offers a wonderful re-introduction to the country.  And the presentation of a flower upon arrival was another of the countless charms of the country.
My first destination was Meaux, just eighteen miles from the airport, to pay a visit to the hotel owned by 1980 Tour de France winner Joop Zoetemelk, a Dutch rider who rode The Tour sixteen times, and finished second a record six times.  I had passed through Meaux before but had never made the effort to seek out his hotel.  There were signs to it, Le Richemont, on the outskirts of the town, but I stopped in at the tourist office anyway, curious to hear what they might have to say about it and what contributions Zoetemelk might have made to the town.  Unfortunately the tourist office was closed for the holiday, one of only three days in the year it was closed.  The others were Christmas and New Years, indicating the importance of this holiday, superseding even Bastille Day.
I rode with eager anticipation of what cycling memorabilia would be hanging in the hotel and asking Zoetemelk  about his 1985 World Championship win over Greg LeMond at the age of 38.  I was also curious what he would have to say about his breakaway with Bernard Hinault on the final stage of The Tour de France one year when he was second to Hinault and trying to wrest the Yellow Jersey from him and if he would have any comment about testing positive for drugs after that stage.  Rather than a lengthy suspension, as is now the penalty, he was simply docked ten minutes, a mere slap on the wrist as he still finished second in the overall.
Unfortunately,  Zoetemelk no longer owned the hotel and there was no evidence that he had.  The young Russian male at the counter knew nothing of him, nor did he know when the current owners had taken possession of the hotel.
This was the second time I was thwarted in meeting a Tour de France winner at his hotel.  The first was Stephen Roche, as he too had sold the hotel he once owned, his outside of Nice on the Mediterranean, though I only missed him by one year, as it was undergoing renovation when I stopped by a couple of years ago.
Beyond Meaux I was quickly out into luscious green countryside.  Crops were already sprouting and the trees were in full foliage despite the cool spring.  All seemed perfectly manicured as if awaiting the arrival of a presidential entourage. 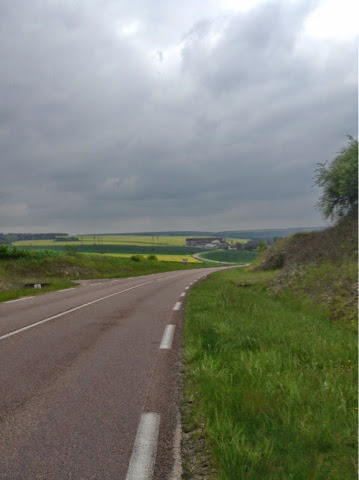 The sky was heavily overcast.  When it began to rain I answered the strong beckoning of a forest to come camp. It was thick enough that the rain barely penetrated as I set up my tent.  I was plenty tired, not sleeping much on my flight, as it left too early in the evening for me to be tired enough to sleep.  A good book and a couple hundred movies to choose from, including all the recent Oscar nominees, also made it hard to close my eyes and put my head back.   I had hoped to push on for a couple more hours, and get at least fifty miles into the countryside, but had to settle for thirty.  I have ten days to ride not much more than 600 miles, unless I detour for some Andy Goldsworthy sculptures in the foothills of the Alps, so it was no big sacrifice.
I had to wait until the next day for an open supermarket to stock up on my favorite French fuel--madeleines and mint syrup to flavor my water.  They both tasted as good as ever.
The skies remained dank and thickly clouded and brought another afternoon rain after biking along one of the many canals that lace the French countryside. 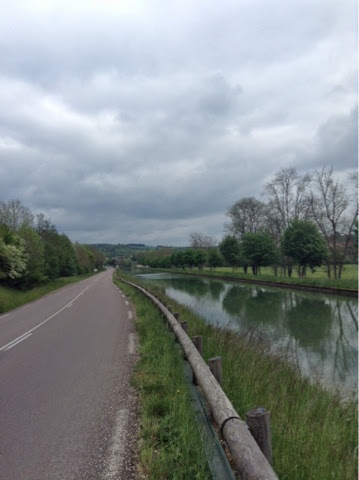 I didn't let this rain deter me, resisting the whispers of more forests inviting me to come camp, waiting until early evening to penetrate into another.  All but my shoes and socks had tried out after the rain had stopped and I continued cycling until I came upon a forest that was too inviting to ignore.  Even the birds welcomed me, chirping until dark, seemingly as happy as I was to be back in France with its premium cycling and the world's premier film festival and premier bicycle race awaiting me.
Posted by george christensen at 4:11 AM

G'Day George.
In France, the Law relating to camping is leniently interpreted, there are many pleasant locations to camp legally and free camping is enjoyed by many. I think is would be interesting to post pictures of your camps and some comment on the Law.

Good on you george ! yours stories paint a great picture for us
Bon Tour mate vincent

Your "New ! Improved !" blog reports are so enhanced by your luvverly photos, it's even more of a pleasure to read

Please do take time to study for the real test of riding on the left hand side once in the U.K.

Meanwhile have the safe and good time you deserve

- david (not a robot)
Impossible to sign in with the security system...!