It was no surprise that there was no sign on the outskirts of Plano announcing "Birth place of Lance Armstrong."  But it was a surprise to discover it was a sprawling town of a quarter million people without any real central district, just a serious of shopping malls and clusters of businesses along the many six-lane highways intersecting it. I had envisioned it as a small Dallas suburb from my memory of how it had been portrayed in Armstrong's "It's Not About the Bike," and other biographies.

It was certainly smaller when Armstrong was a youth thirty years ago, but it has grown large enough to support three public libraries.  Neither of the two I perused had much of a collection of Armstrong books. One chose to feature atop a book shelf Floyd Landis's defiant 2007 autobiography, "Positively False" proclaiming his innocence, over any of Lance's books.

I was hoping to find some plaque or monument honoring Armstrong in the town he grew up in.  But there was no such thing to be found, past or present.  The local Plano bike shop that he patronized growing up did not acknowledge him in any way.  What Lance memorabilia it once had on display was long gone, though none of the employees, nor anyone else in Plano, I spoke with expressed any animosity towards him, just disappointment.

But it was a different story at the huge Richardson Bike Mart in the town just south of Plano where Armstrong's mother bought him his first BMX bike and that also sponsored him early in his career.  The store is owned by long-time Armstrong supporter Jim Hoyt, who loaned Armstrong the money for his first car and served as a father-figure, mentioning in an aside as we talked, "I raised Lance."  Though they've had some differences over the years, they remain on good terms.  Lance was a surprise guest at a group ride celebrating Jim's 60th birthday a few years ago.  They most recently spoke over the holidays when Lance called to let him know he was doing okay, other than not being able to compete. 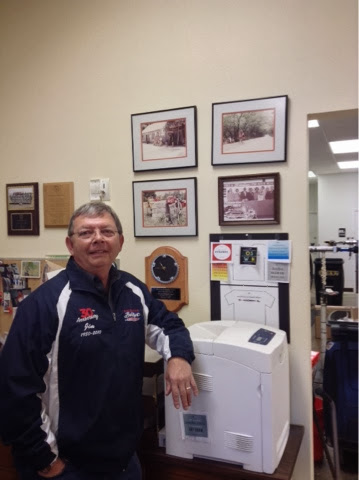 Hoyt now owns three bike stores. I was most fortunate to discover him at his flagship store when I stopped in. He couldn't have been more affable nor generous with his time, happy to talk Lance and bicycling.  He acknowledged that he took down the seven signed yellow jerseys from each of Armstrong's Tour wins after his Oprah confession last January in response to assorted Internet threats, but other Lance jerseys still hang around the shop, including his World Championship jersey. 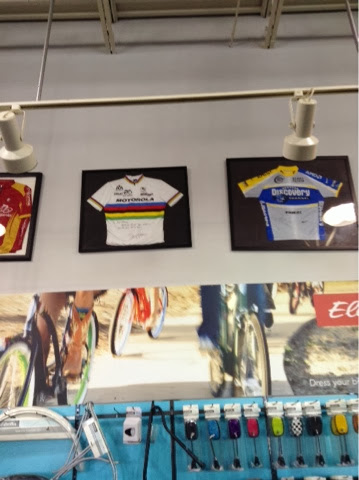 There was also a painting of Lance over the door to a back room and one of Lance's early bikes hanging from the ceiling in another room. 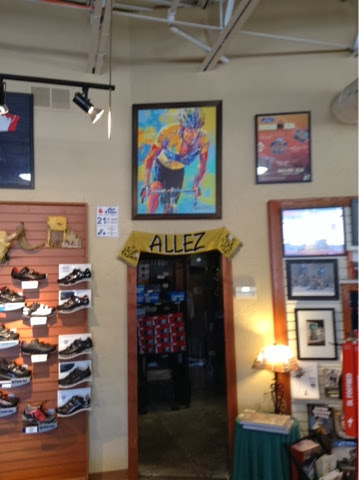 Hoyt is often mentioned in Lance biographies, including the latest indicting Lance, "Wheelman," by two Wall Street Journal reporters.  He said he declined to be interviewed by them and that all the material relating to him had been culled from other books, including Daniel Coyle's "Armstrong's War," a book that did not have his favor.

We discovered that we had both been on L'Alpe d'Huez for the 2004 Tour time trial, Jim at the Dutch Corner and I at the summit.  Jim had arrived by helicopter to the summit and then descended to the Corner.  He was also in Paris at Lance's first Tour triumph in 1999.  He hadn't planned on attending The Tour that year, but when Lance devastated his competition on the first mountain stage at Sestriere, a friend of Jim's decided to fly over and Jim arranged to make the trip too.  He had to trick the gendarmes by feigning an illness to get beyond the barriers to join Lance and the Postal team at their team bus on the Champs Élysées.  I could hardly believe I was hearing these first-hand stories so fondly recalled by someone so close to Lance.  Jim was clearly enjoying sharing all his experiences and didn't want to stop talking.

As we walked around his Texas-sized bike shop, several times bigger than Lance's Mellow Johnny store in Austin, I kept looking for a Tour course marker.  Jim said he had had a few hanging at one time and some from the Giro as well, but now the only Tour memorabilia he had on display was a Champion supermarket banner, sponsor of the Climbing competition, that was a delight to see and further stirred the memories. 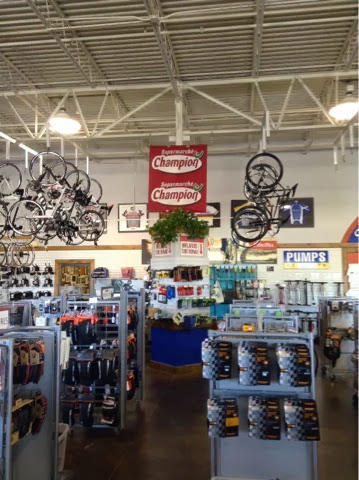 We also talked touring.  One of the photos behind Jim's desk was of the bike he toured on back in the '70s.  He said he went off on his bike for a several day tour when he had reached a critical crossroads in his career and had to decide whether to relocate to Chicago and accept a promotion with Schwinn, who he was working for as a sales rep, or remain in Texas and buy a small bike shop.  He decided to stay in Texas.  The small store he bought has now grown into one of the largest in the country.

We also shared memories of riding the thousand mile stretch of Vietnam from Saigon to Hanoi, which we had both ridden a few years apart, Jim as a Vietnam vet and I as a venturesome touring cyclist.  His most recent long-distance tour was a coast-to-coast ride across the US from Portland, Oregon to Portland, Maine.  I told him I had driven down to Texas with my girl friend to get in some winter cycling and training for a ride around the Philippines next month and asked if he could recommend any place for some good miles.  He immediately suggested Fredericksburg, 250 miles south.  It is known as the cycling capital of Texas and has a number of good routes through the hills.  It had the added benefit of a bike shop owned by a couple who were ardent touring cyclists, having completed a three-year tour of the world before settling down.

Jim was another of the many warm and gregarious Texans and southerners Janina and I have met in the past two weeks as we drove down to New Orleans and on to Grand Isle, the lone resort on Louisiana's 300-mile Gulf coast, and then over to Dallas, where we are presently visiting a friend of Janina's from her art school days at Indiana University.  It was a twenty-five mile ride from his house in Irving to Jim's bike shop.  Despite the sixty degree temperatures, I was the only person I saw on a bike there and back and on up to Plano, my longest ride in a couple of months.

Janina's  friend Greg teaches art at the University of Texas Dallas branch.  He keeps up with his own art as well, having been named the best artist in Dallas three times in the past ten years by a poll of readers for a Dallas newspaper.  He is most famous for his Cow Pope, transported in a Pope-Mobile, that he debuted in Houston's annual Cow Parade a few years ago and still makes appearances here and there.  He also has the distinction of appearing in the Ninth Inning of Ken Burns' baseball documentary in a photo as a ten-year old standing in line for Mickey Mantle's autograph, one of the most memorable events of his life.

Even though we are traveling by car and aren't using our bikes as much as we'd like, it has been a great road trip full of encounters with fascinating folk and delightful surprises, including an outrageous sculpture garden in Brownsville, Tennessee called Mindfield, a life-long project by a fellow named Billy Tripp.  We were drawn to Brownsville to see its Carnegie library and as part of an homage to the travel writer Richard Halliburton, who was lost at sea in 1939.  Brownsville was his birthplace.  Fifty miles south we visited his grave in Memphis, as well as a memorial at Rhodes College.   The Brownsville Carnegie was the first of a handful I have added to my life list.  I tracked down three more in New Orleans and others in Vicksburg and Lake Charles.  The only one we've seen so far in Texas was in Palestine, one of only thirteen that remain standing of the thirty-two constructed in the state. Like all but one of those I've seen on this trip, it no longer serves as a library, but still remains a beautiful, prominent building in the town center. 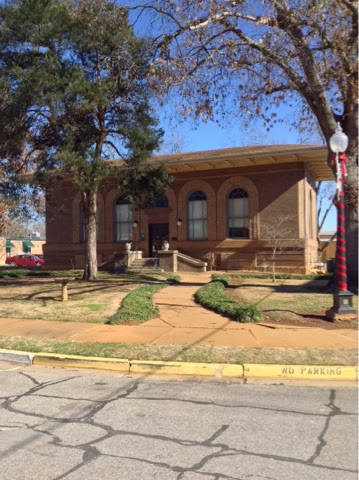 Another theme to these travels is assassination sites.  Dallas is the third.  The first was Memphis. The hotel where Martin Luther King was shot is now a Civil Rights Museum. Huey Long was shot in the state capital building in Baton Rouge in 1935.  It is the tallest state capital, 27 stories high.  Long had it built in 1932.  He is buried in a garden facing the capital.

We had one of our better meals of the trip in the capital cafeteria served by inmates in their jumpers.  It was as southern as could be--beans and rice, lima beans, greens, corn bread and banana pudding.  We also had several bowls of gumbo along the way and a fine cat fish sandwich.  We have been camping in state parks and have had a few nights indoors at cheap Indian-owned motels and a night in a hostel in New Orleans that did not have much heat.  Many of the travelers, unprepared for the record sub-freezing cold, were walking around the hostel wrapped in blankets from their beds.  It was cold enough further south in Grand Isle to kill all the butterflies in the town's Butterfly Dome.  It was the first time the dome was bereft of butterflies since Hurricane Katrina.

We've got another week of fun times before Janina has to be back teaching at Columbia.

Posted by george christensen at 3:48 PM