Done with Nebraska, on to Iowa

If there hadn't been so many people in the buffet line waiting to be fed, I might have joined in and had my first meal in a Carnegie Library, or at least in an auditorium-sized room adjoining a Carnegie, that was a dining area for an organization affiliated with the Catholic Church that serves the needy in Lincoln. 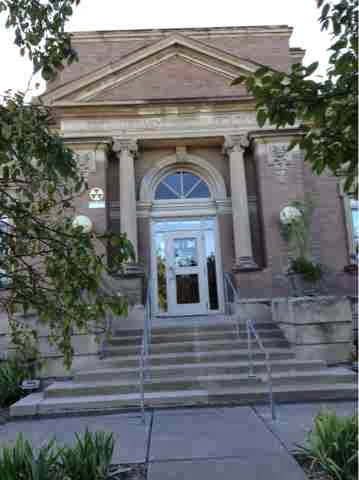 has been renamed the Matt Talbot Kitchen and Outreach, taking its name from an Irishman who lived from 1856 to 1925. After overcoming alcoholism early in his life through prayer, he assumed the role of a 6th century Irish monk, while continuing to work in the timber yards of Dublin.  The Catholic Church has adopted him as an inspiration for alcoholics and addicts throughout the world.  The present Pope holds him in such esteem he wrote a paper about him early in his career.  In 1975 Talbot was declared Venerable, making him eligible for sainthood.

The center serves dinner 365 days of the year from 5:30 to 6:30 and lunch from 11:30 to 12:30.  I happened to show up at 5:45 and had no time to linger with a couple more Carnegies to track down in Lincoln before dark.  Besides food, the center provides medical attention, reading classes, nutrition consultation, showers, hair cuts, counseling, and assistance for housing, though it does not offer any itself.  A sign on the entry warns "No sleeping." It feeds about 150 people a day, with more towards the end of the month when people exhaust their food stamps.

It was one of three former Carnegies in Lincoln that had made the transition from library to another function.  The next on my agenda was now the Marketing and Communications office for Union College, founded by the Seventh Day Adventists in 1891.  It had a set of three sections of steps up to its entry from the sidewalk. 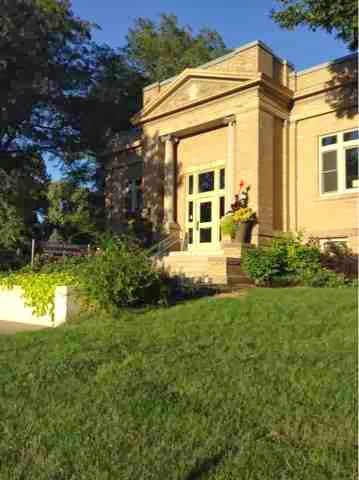 I was initially thwarted in my efforts to find it,  as I was given the wrong address by someone at Nebraska's Library Association.  I had been put in touch with the Library Association by a librarian at Lincoln's Main Library, who couldn't find the information on the Internet.  I spent more than ten minutes on the phone with the Association, as a woman tried to locate the address for it and another local Carnegie that the librarian at the Main Library couldn't locate.  She finally thought to go to a book on Nebraska's Carnegies called "A State of Readers, Nebraska's Carnegie Libraries," by Oliver Pollak.  It was great to learn about this book, but disappointing that no one at any of the Carnegies I had visited in Nebraska had mentioned it.  Such books exist on the Carnegies of Illinois and Indiana and are an invaluable resource.

Unfortunately the book had the incorrect address for both of the Carnegies I was trying to track down, though by just a block or so.  Both were on 48th street--this one reportedly at 3800 South.  There was a library at about that address set off from the street on the campus, but it had a date of 1936 on it and did not have the dignified look of a Carnegie.  After circling around the campus a bit I found the actual Carnegie further south down 48th street with an address of 3938 on it.

From there it was seventy blocks north on the fairly busy 48th street to 2719 North for the other Carnegie. On the way I passed the National Museum of Roller Skating.  Once again I had a faulty address and had to do some searching.  The library was actually on the other side of the street and a block down at 2820 and was now the offices for an Engineering Company.  It wasn't visible from 2719.  I picked the wrong person to ask if there was a former library in the vicinity.  It was a Friday evening and he was on his way to a liquor store with his girl friend.  I told him I was looking for a Carnegie library that was supposed to be in the vicinity.  He just sneered at me, saying "So what," oblivious to the nearby historic and magnificent Carnegie. 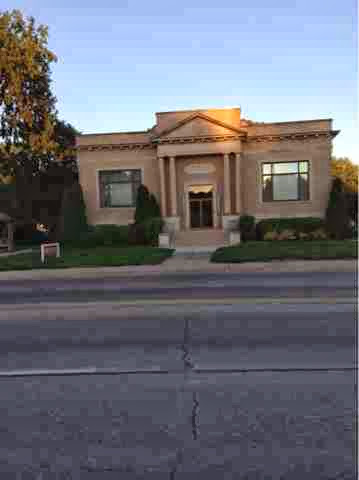 I didn't have to search out the suburban Havelock Carnegie, as it had been demolished and replaced by a new library on the same site.  The same was sadly true of Lincoln's main downtown library.  It had been a grand, monumental building funded by an $86,000 grant, bigger than that of Colorado Springs.  If it had been preserved, it would be one of the finest buildings in Lincoln, if not all of Nebraska.

I had a final two Carnegies to look forward to the next day before crossing the Missouri River into Iowa on a toll bridge (25 cents for bicycles). I continued on the Cornhusker Highway, Route 6, out of Lincoln.  All sorts of businesses, and even roads, take on the Cornhusker name, the nickname for the University of Nebraska. My final day in Nebraska began with an hour-long morning radioshow called  "Gromaha," hosted by two ardent civic-minded boosters of Omaha.  They welcomed a series of guests asserting what a great place Omaha was to live and have a business. They managed to go the whole show without mentioning Warren Buffet.  But the college football team could not be overlooked, something that is a virtual state religion.  One of the show's topics was the sale of pizza at the games and how sales are up when the team is winning.

Husker football seemed to come up at least once a commercial break on any local radio show, especially this week after the team suffered a devastating loss to UCLA, squandering a 21-3 lead and then someone releasing a profanity-laden tirade by the team's head coach from two years ago after the Cornhuskers came from behind to beat Ohio State at home after the fans had seemed to give up on the team.  The big issue was who taped it and why they waited so long to release it, rather than the coach's rant.  A lesser issue brought up by one radio host was over fans releasing the red helium balloons many take to the games after the team kicked a field goal for their first score of a game, when the tradition is that they should be held until after the team's first touchdown.  He claimed the Pope issued an edict condemning such impatience.

The Carnegie in the small town of Ashland was quite charming and in its original state, 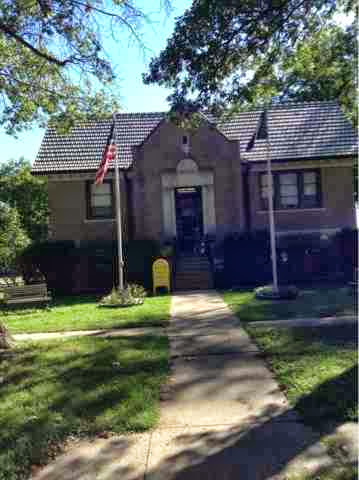 but so small and little used that the waitress and the cook in the town's lone cafe, where I loaded up on biscuits and gravy, as they were a better bargain than hotcakes, couldn't tell me where it was, even though it was just three blocks away.  An old-timer in the cafe gave me directions, down one block then over two and just past the church.  The town has a site picked out for a new larger library on its Main Street, but was awaiting funding for it.  Unlike many of the Carnegies in Nebraska, it did not have Carnegie chiseled into its facade, but did have a marker in a flower bed out front acknowledging its lineage. 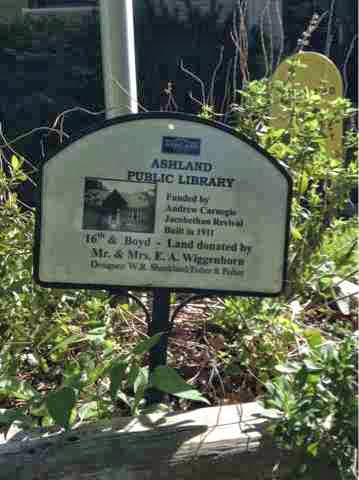 The Carnegie in Plattsmouth had had two additions over the years that so seamlessly extended behind it, matching the original red brick, that they hardly seemed like additions. 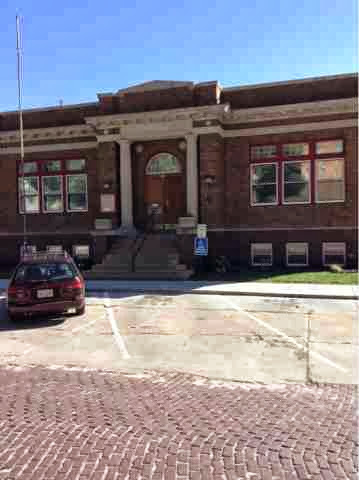 A plaque by its entry paid tribute to the original librarian who served for over fifty years. 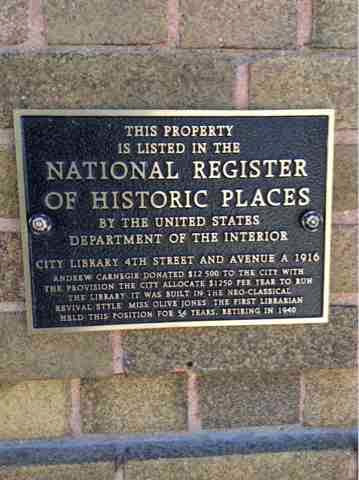 There were also two dignified portraits honoring her in the library, one a photograph and the other a painting.  The present librarian said her successor also served for fifty years. She has a long ways to equal them, but would be pleased if she did.  I had the library all to myself as it was Saturday afternoon and the Cornhuskers were playing.  With no competition on the WIFI, I was able to have an uninterrupted Skype call with Janina out front of the library with cicadas chattering away and an occasional freight train passing.  It was our first chance to Skype in a while, enabling me to catch up on the four classes she is teaching at Columbia this fall and also hear more about the three profiles she wrote for New City's recent issue on the movers and shakers of  Chicago's art community.  One of her subjects, the owners of the Dempsey-Corbett gallery, ranked seventh.

Now its on to Iowa and another stretch of Carnegies and cornfields.

In my final miles of Nebraska I passed a restaurant that holds an annual "Testicle Festival." Though it is the Cornhusker state, beef contributes more to its economy than corn. 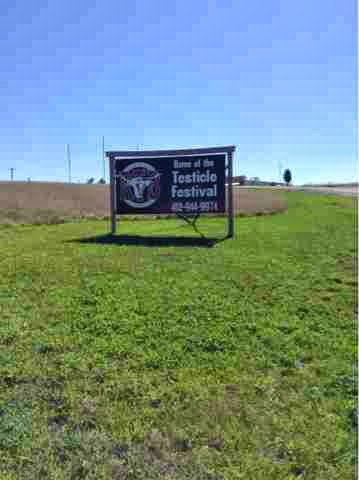 Carnegie funded sixty-nine libraries in Nebraska.  I was able to check in on seventeen of them. Five had been torn down.  Only four of them still were used as libraries with two still in their original state without an addition.  Of the eight that were being used as something else, all retained their striking stature other than the one in Lexington, whose exterior had been dramatically altered.  Most still had Library chiseled into their front facade.  The thrill of discovering each was as strong as ever.

Posted by george christensen at 10:16 AM